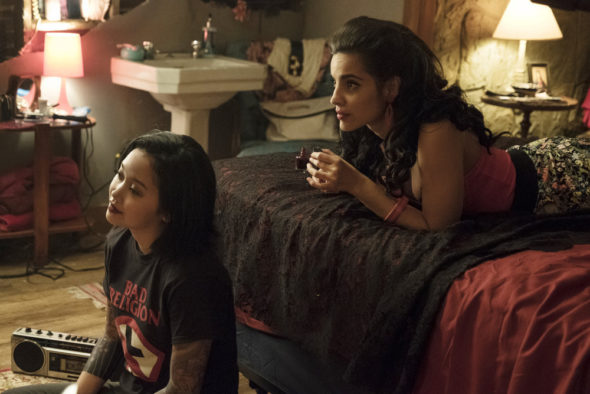 Does the first season of Syfy’s Deadly Class TV show make the grade with you? As we all know, the Nielsen ratings typically play a big role in determining whether a TV show like Deadly Class is cancelled or renewed for season two. Unfortunately, most of us do not live in Nielsen households. Because many viewers feel frustration when their viewing habits and opinions aren’t considered, we’d like to offer you the chance to rate all of the Deadly Class season one episodes here. *Status update below.

What do you think? Which season one episodes of the Deadly Class TV series do you rate as wonderful, terrible, or somewhere between? Should Syfy cancel or renew Deadly Class for a second season? Don’t forget to vote, and share your thoughts, below.

*6/5/19 update: The Deadly Class TV show has been cancelled so there won’t be a second season, at least on Syfy.

This is an amazing show. It’s unlike any other show on TV. They are pushing the envelope with this show and you can really tell who the uptight folk are just by their responses. Bring it back!

I loved this show. I thought it had awesome 80’s music

Worst show ever. Take it off. PLEASE!

Show sucks. Suppose to be teens training to be killers so where’s the training? FF and wacth in 20min. now.

I really hope they renew this show I loved it