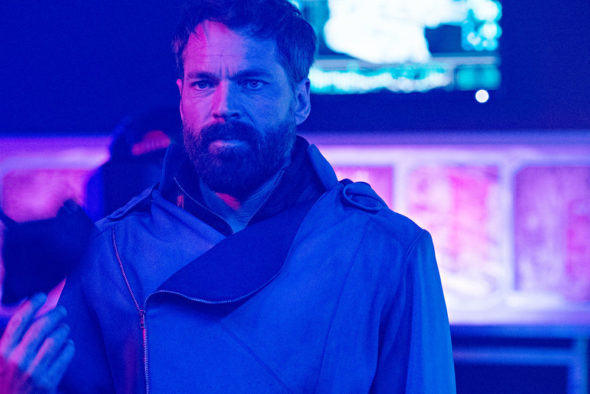 Will Elida find her mother in the first season of the Vagrant Queen TV show on Syfy? As we all know, the Nielsen ratings typically play a big role in determining whether a TV show like Vagrant Queen is cancelled or renewed for season two. Unfortunately, most of us do not live in Nielsen households. Because many viewers feel frustration when their viewing habits and opinions aren’t considered, we invite you to rate all of the first season episodes of Vagrant Queen here. *Status update below.

A Syfy Western series, Vagrant Queen stars Adriyan Rae, Tim Rozon, Alex McGregor, and Paul du Toit. The show revolves around Elida (Rae), a former queen turned scavenger who’s been on the run since her throne was stolen as a child. A charming old friend of Elida’s, Isaac (Rozon) shows up claiming that her mother Xevelyn is still alive. The two head off with their new ally, a skilled mechanic and pilot named Amae (McGregor), to stage a rescue that will take Elida back into the perilous heart of her former kingdom and up against a deadly foe from her childhood — ruthless and power-hungry Commander Lazaro (du Toit)..

What do you think? Which season one episodes of the Vagrant Queen TV series do you rate as wonderful, terrible, or somewhere between? Do you think that Vagrant Queen should be cancelled or renewed for a second season on Syfy? Don’t forget to vote, and share your thoughts, below.

*6/27/20 update: Vagrant Queen has been cancelled so, there won’t be a second season.

I come to TV rarely and for a good laugh. I love me a good cheesy sci-fi show and this fits the bill. The aliens were varied and the prosthetics were phenomenal. The music was fun! Slow funk music. Epic electro music. Hilarious! My favorite bits I looked forward to were the mannequin challenges, cleverly shot to give it a true comic book feel. I loved the story it told, and you didn’t know which side was the “good” side and which was the “bad” side. The lead is my favorite kind of lead: a strong female tasked with saving… Read more »

Please make a series 2 of the vagrant queen I enjoyed every episode . The best series of 2020 in my opinion⭐⭐⭐⭐⭐

Oh my gosh this show was AWFUL! Where do I even start? First: was there a contest to see how many people you could have as main characters with a speech impediment before it takes away from the show? Because if so, mission accomplished. 3 listers, and one that barely can say words with r. Wtf? Second, the leading actress is AWFUL! Oh my gosh she is the most incongruently, unemotive, wooden, ass backward actress I’ve ever seen, rivaled only by Kristen Stewart, and we’ll get to her in a minute. She is completely inexpressive, and in several parts where… Read more »

Decent set and effects, but terrible cringe-inducing dialogue. Can’t hold a candle to other contemporary Sci-Fi, like What we do in the Shadows.

Best show this year so far!

This is such a great show! I love the humor, the characters, the lighting, the costumes, the music, everything about it!!! Such a fun show to watch.

I loved the first episode , cannot wait for episode 2!! Really enjoyed the comedic performance of the characters and they are badass!! Lighthearted in times like these!!

Suck ass show, SyFy cancels the show Killjoys and puts this crap on.