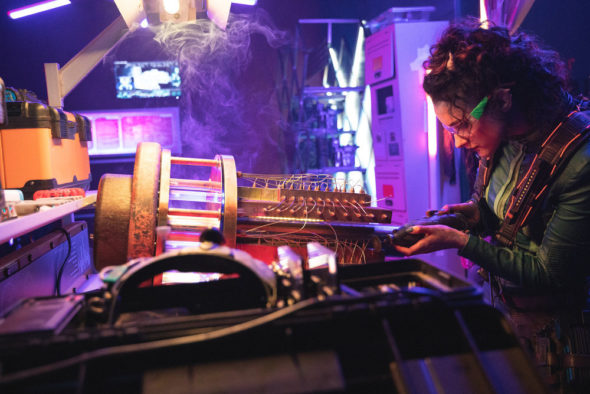 In the past year, Syfy has cancelled or ended most of its scripted TV shows. Now, the channel has introduced a new one called Vagrant Queen. How will it perform in the ratings? Can it survive? Will Vagrant Queen be cancelled or renewed for season two? Stay tuned. *Status update below.

A sci-fi Western series, Vagrant Queen stars Adriyan Rae, Tim Rozon, Alex McGregor, and Paul du Toit. The show revolves around Elida (Rae), a former queen turned scavenger who’s been on the run since her throne was stolen as a child. A charming old friend of Elida’s, Isaac (Rozon) shows up claiming that her mother Xevelyn is still alive. The two head off with their new ally, a skilled mechanic and pilot named Amae (McGregor), to stage a rescue that will take Elida back into the perilous heart of her former kingdom and up against a deadly foe from her childhood — ruthless and power-hungry Commander Lazaro (du Toit).

What do you think? Do you like the Vagrant Queen TV series on Syfy? Should it be cancelled or renewed for a second season?

*6/27/20 update: Vagrant Queen has been cancelled so, there won’t be a second season.

I think it’s a very refreshing show , love it and would hate to see it go

I like it. It’s fun and full of action.

Didn’t have much anticipation for this and it managed to under deliver. Vagrant Queen? More like Fragrant Queef.

Painfully low-budget production. The amateurish action scenes are confined within a repetitive box. The acting is laughable. This new series deserves a facepalm emoji.

Watched episode 1 last night and found it boring. Hoping for something to replace Killjoys so I’ll watch a few more to see if it picks up.