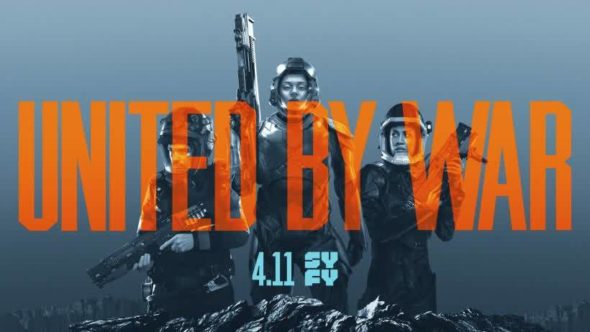 Last year, The Expanse TV show lost some viewers, but it still remained one of the better performing Syfy TV series. Can it bring back some of the original audience in the third season, or will the slide continue? Will The Expanse be cancelled or renewed season four? Stay tuned. **Status update below

A Syfy drama, based on the science-fiction novels by James S. A. Corey (i.e. the pen name for authors Daniel Abraham and Ty Franck), The Expanse stars Steven Strait, Shohreh Aghdashloo, Dominique Tipper, Cas Anvar, Wes Chatham, and Frankie Adams. The story unfolds 200 years in the future, in a colonized galaxy, when two strangers are caught up in a vast conspiracy. Season three kicks off immediately after the events of the second season finale, with Earth, Mars, and The Belt at war. The quest to discover the secret of the protomolecule intensifies and every decision made risks the survival of the solar system. .

What do you think? Do you like The Expanse TV series. Should Syfy cancel or renew it for a fourth season?

**5/26/2018 Status Update: Amazon has picked up the fourth season of The Expanse. Details here.

**5/11/2018 Status Update: The Expanse has been cancelled by Syfy, but there’s still hope for season four. Details here.

Actually an amazing show! I enjoy every episode of it.

Best SCI FI show in TV in many many years. Never watch the channel as it pretty much sucks, but hats off to Amazon for continuing the show.

Expanse needs to be earlier. Who can stay up that late, even retired.

Record it or stream it – and watch it later

Yep: I was right: ‘The Expanse’ is to be continued! 🙂 GOD bless Amazon for this decision – and may the responsible(s) at Sy-Fy-Network burn in HELL!!!

This show started slow but has picked up in speed and complexity in the story to make it one of the most looked forward shows each season. And Sci-Fi yet again wants to dump a show that works for the fans! The powers-that-be that make these decisions at Sci-Fi need to be fired. Too many good shows have left the air because of poor executive decisions. Like this survey is doing, ask the fans first!

Must and will continue! Quality finds it’s way…

I am from Germany and watching on Netflix. One of the best sci fi shows. KRYPTON HAS BETTER RATINGS THAN THE EXPANSION !!! What is going on with the Americans?