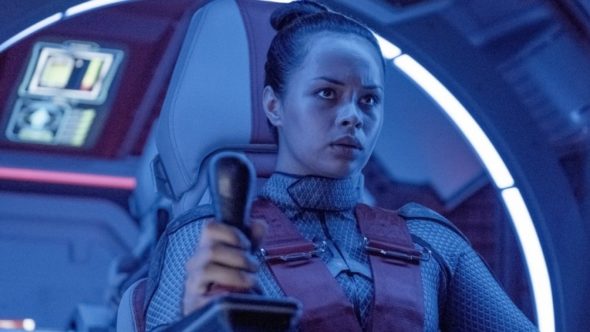 Why did Amazon save The Expanse? Recently, studio head Jennifer Salke spoke with Deadline about the streaming service’s decision to pick up the cancelled Syfy TV show.

Speaking to Deadline, Salke says Prime Video picked up The Expanse because of the show’s fans:

There were airplanes circling us, I was having cakes delivered, there was a whole thing happening. And then really smart people, whose opinions I really value creatively, started reaching out to me, saying, “have you seen this show, The Expanse, it’s actually great”. I hadn’t so I spent some time, I watched the show and I was like, this show is actually really well done, why is nobody watching it? At the same time, Jeff Bezos was getting emails from everyone from George R.R. Martin to every captain of industry, like the founder of Craigslist, and they were all writing, saying, there’s this show, it’s so great, you have to see it, you have to buy it or save it.”

What do you think? Have you seen The Expanse? Will you watch it on Amazon?

Love the show, was gutted when they said it was cancelled then Amazon came along, and wow, absolutely awesome, and my housemate just signed up to Amazon Prime,looking forward to the next season and Amazons Originals.

The Expanse is a great show! I’m glad that Amazon has renewed it. I think I’ll keep my Amazon prime.

Love, Love this show. Long time since a great syfy show. Happy to hear it was saved.

the Expanse is a great show, I’m glad it was saved.

Love this high quality sci-fi production, great story, acting and direction. Glad someone has picked up the show. Can’t wait to see series 3.

I think that this is good news. I’ve been enjoying The Expanse ever since the pilot aired, and still loving it! 😉 Recommended TV IMHO.

Just recently discovered it and like it. WILL watch on Amazon. Thanks to Amazon for saving a very good show!

Glad someone saw sense and saved this show. Absolutely fed up with cancellations that are undeserved.

I’ve seen it, loved it. I try not to get too attached to the Amazon Originals (that also goes for Netflix and Hulu), because just as you get interested, they cancel. It’s only MY opinion but this show is/was well done, perfect representative for the SyFy genre.

I haven’t seen the show because I didn’t know of its existence. I’m interested, however, and will try to find some episodes tomorrow.

If you have this much money as that guy you can do anything you want so he did. It’s not about ratings about ego.

yes i Will watch it on Amazon love the show

Dave Colclogh, in reference to your response, huh?