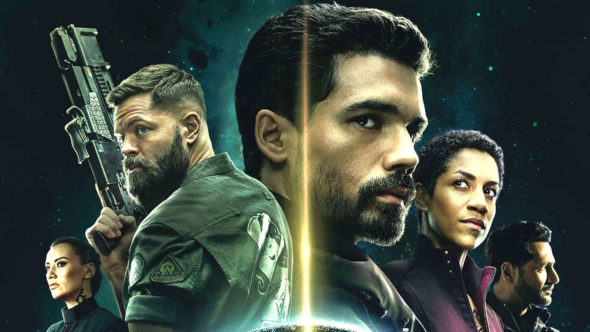 Amazon Studios is planning for the future. The company announced today that The Expanse TV series has been renewed for a sixth and final season on Amazon Prime Video.

The sci-fi series initially aired for three seasons on Syfy before being cancelled. Amazon picked it up for a fourth season a few weeks later. Season five launches on December 16th and it’s expected that the final season will be released in 2021.

Here’s the Amazon press release about the sixth and final season renewal:

The season renewal comes ahead of the series’ 5th season, which will debut December 16 on Amazon Prime Video

CULVER CITY, Calif., November 24, 2020 – Amazon Studios today announced it has ordered a sixth and final season of the fan-favorite Amazon Original series The Expanse, based on James S.A. Corey’s best-selling books. Renewal of The Expanse for a final season comes in advance of the anticipated fifth season, which will premiere December 16th on Amazon Prime Video in more than 240 countries and territories worldwide.

Andrew Kosove and Broderick Johnson, Co-CEOs and Co-Founders of Alcon Television Group, and Executive Producers of The Expanse, said: “From the moment we committed to bringing this show to life up until this final season, we have worked tirelessly to honor the vision of the writers. We have prided ourselves on having one of the most diverse casts on television and giving a platform to stories that matter. A special thanks to Daniel Abraham and Ty Franck, the writers of both the books and series, and to Naren Shankar, the series showrunner and Executive Producer. It continues to be an honor and privilege to work with this team. We also would like to thank Amazon for their continuing support to help us tell this story in its fullest and to bring The Expanse to a global audience.”

“The dedication and artistry of everyone who helps bring The Expanse to the screen is incredible,” said Naren Shankar, Executive Producer and Showrunner, The Expanse. “Our fans are awesome, and we cannot wait to get rolling on Season Six!”

“We’d like to thank Naren, Andrew, Broderick, everyone at Alcon and the entire cast and crew of The Expanse for the hard work and love they have put into the series over these past seasons,” said Vernon Sanders, Co-Head of Television, Amazon Studios. “We’re very happy we can give the incredibly loyal and passionate fans of The Expanse the satisfying conclusion to the series that they deserve. We know they’ll love how Seasons Five and Six unfold.”

The Expanse is set in the future where humanity has colonized the solar system and the people of Earth, Mars and the Asteroid Belt have long been in opposition with one another. When the crew of the Rocinante uncovers an ancient alien technology, a vast conspiracy begins to emerge, one that will bring the solar system to the brink of war.

The Expanse is a high-action, sci-fi adventure that explores the depth of humanity against the far-spanning reaches of the known universe. The series is rooted in science and fiction while remaining a thorough and thoughtful examination of some of the most vital societal issues of our day.

The Expanse series was picked up by Amazon Prime Video in 2018 for a fourth season, which released globally as an Amazon Original Series in December 2019. The much anticipated fifth season of The Expanse will debut beginning December 16th, 2020 with three episodes and will continue to debut one episode weekly through February 3, 2021.

What do you think? Do you like The Expanse TV series? Are you looking forward to season five and season six? Are you sorry that the show is ending?

I think the show should continue. I love this show. In Season 6 , Holden said the Ring region will need protection from pirates and illegal activity. It will need policing. Why not the crew of The Rocinate ? Bobbie Draper and Amos could provide the muscle !!

You really can NEVER know how happy this makes me &many others…in this day &age u can start a season get to the penultimate ep to find its canceled this is a growing trend…Really feel that film/ streaming companies etc should give their paying customers a real opportunity to actually get into New progs….what happened to the 22/23 episodes with none of this midway finale rubbish if it a 2 season with 10 in each ..say that…we’re adults uno‍♀️ Michael j Stravinsky offered a 5year contract of a sci-fi Called Babylon Five…and we all know how successful that was. We… Read more »

Liked the show more since it went on Amazon. Hope it can continue somewhere

I haven’t been so invested in a series since LOST.

What the **** ending after season 6 when there are 9 books? Commit yoursetf to enable seasons 7, 8 and finally 9! THAT’S the spirit! Let patter down a neverending shitstorm on the persons responsible for this totally wrong and freaky decission!

Don’t write it off just yet…

I am surprised at being reported as finishing with Season 6, when I have not even seen any mention of Season 5 !!!!!!! Is there a mistake? Has it ever been broadcast?

Never heard or watch it either saw advertisements on syfy channel I am guess revival on amazon prime must be good too bad it ending bummer .

Seriously?
Even the (book)writer of Game of Thrones loves this series. Comparisons with the absolutely marvellous part of GoT (seasons 1 till 6) are made by many. Decent acting, very good production values and a gripping story.

Heck, even if you have nothing with Science Fiction as a genre, the story alone will keep you watching.

Cancelled series that are picked up by other studios (or streaming service), there must be something good happening. And with ‘The Expanse’ it absolutely does.