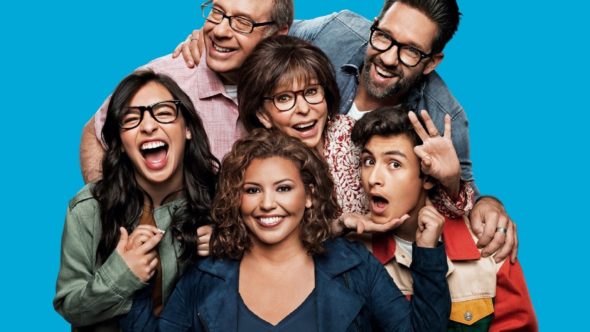 Last year, Netflix cancelled One Day at a Time after three seasons. Pop revived the series but has since cancelled all of its other upcoming original scripted series (in one case, a week before a premiere). So, is this revived sitcom is already doomed to be dropped again? Will One Day at a Time be cancelled or renewed for season five? Will a second airing on CBS help? Stay tuned. *Status update below.

A Pop family sitcom (which is simulcast on TV Land), One Day at a Time stars Justina Machado, Rita Moreno, Isabella Gomez, Marcel Ruiz, Todd Grinnell, and Stephen Tobolowsky. This series is a reboot of the Norman Lear original. In the updated comedy, the story centers on Cuban-American Penelope Riera Alverez (Machado). This US Army veteran and divorced mother is just trying to balance work and her social life while raising her kids, Elena (Gomez) and Alex (Ruiz). Thankfully, she has the support of her Cuban mother, Lydia Riera (Moreno), her boss, Dr. Leslie Berkowitz (Tobolowsky), and landlord Pat Schneider (Grinnell).

10/27 update: You can see the latest night’s ratings in context.

Note: If you’re not seeing the updated charts, please try reloading the page or view them here, here and here.

Note: The season premiere was also simulcast on sister channel Logo (0.01 in the demo with 26,000 viewers).

What do you think? Do you like the One Day at a Time TV series on Pop or TV Land? Should it be cancelled or renewed for a fifth season?

*11/25/20 update: One Day at a Time has been cancelled, but is being shopped to other outlets.

One day at a time is a phenomenal show. It talks about real issues and still helps us to laugh about it. With all the irrelevant, stupid shows on nowadays it would an tragedy if this show were to get canceled. This show actually puts Latino Americans in a positive light. I can’t believe networks aren’t doing what they can to keep it on.