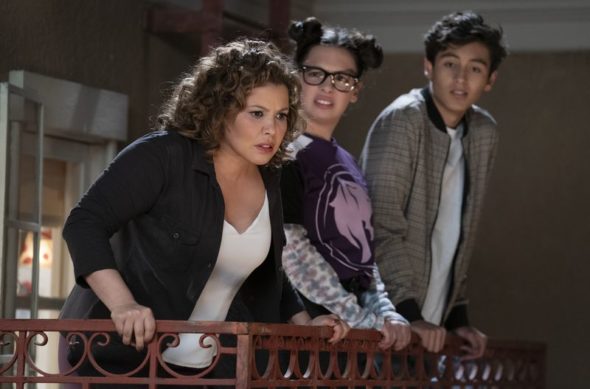 Will the Alverez family be dropped again? Has the One Day at a Time TV show been cancelled or renewed for a fifth season on Pop? The television vulture is watching all the latest cancellation and renewal news, so this page is the place to track the status of One Day at a Time, season five. Bookmark it, or subscribe for the latest updates. Remember, the television vulture is watching your shows. Are you?

Airing on the Pop cable channel (and simulcast on TV Land), One Day at a Time stars Justina Machado, Rita Moreno, Isabella Gomez, Marcel Ruiz, Todd Grinnell, and Stephen Tobolowsky. This series is a reboot of the Norman Lear original. In the updated comedy, the story centers on Cuban-American Penelope Riera Alverez (Machado). This US Army veteran and divorced mother is just trying to balance work and her social life while raising her kids, Elena (Gomez) and Alex (Ruiz). Thankfully, she has the support of her Cuban mother, Lydia Riera (Moreno), her boss, Dr. Leslie Berkowitz (Tobolowsky), and landlord Pat Schneider (Grinnell).

Find out how One Day at a Time stacks up against other Pop, TV Land and CBS TV shows.

Will Pop cancel or renew One Day at a Time for season five? The cable channel revived this family comedy after Netflix cancelled it. However, last month, the channel cancelled all of its other upcoming original scripted series. There had been talk of moving One Day at a Time to TV Land and, given that the show performs better on that channel, that seems likely to be the show’s best hope for survival. I’ll update this page with breaking developments. Subscribe for free alerts on One Day at a Time cancellation or renewal news.

11/25/20 update: One Day at a Time has been cancelled, but it is being shopped to other outlets.

One Day at a Time Cancellation & Renewal Related Links

What do you think? Do you hope the One Day at a Time TV show will be renewed for a fifth season on another outlet? Are you sorry that Pop TV cancelled this series?

One Day at a Time is a family show! My children love the show and it’s the ONLY show we enjoy/love every Monday at night! Please bring it back!!!!! My children were so disappointed today when they didn’t see it as usual. This show gives us a good laugh!

it`s on CBS new.. i hope to get , One Day at a Time fifth season. Stay tuned for further updates.

Smart. Funny. Great cast. And storylines. We need this show & more like it!!

Please keep One day at a time rolling!!!
At this point in time, with this Pandemic, political news covering almost the whole day, we need something as fun as ,,”One day at a time” it’s funny, interesting, serious sometimes and the best cast! I love all of them! Please…please season 5 come back!!!
This is the Best show I have seen in like…forever. Thank you!!

Love …One Day at a Time… I hope it is renewed. I can’t get enough of it. It’s the only show that when it’s over I wish there was more.

THIS IS THE BEST SERIES THAT IS STILL ON AIR! PLEASE PLEASE PLEASE DON T CANCEL IT I CAN T LIVE WITHOUT IT IT DESERVES AT LEAST A 5TH SEASON! AT LEAST!

This show does a great job of introducing Latin culture to the American population in a funny way. Kind of what all in the family did bringing bigotry to the forefront. It is also hysterically funny. In a really depressing world this is my Ray of sunshine. Definitely Norman Lears best work.