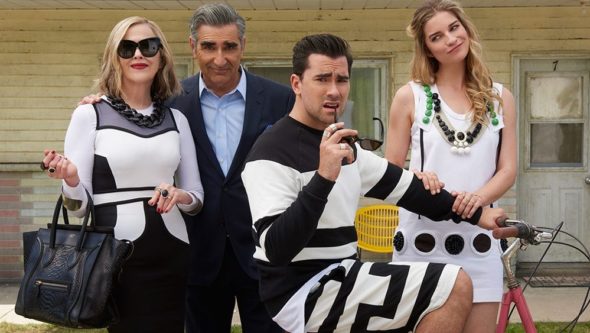 Will this comedy come out smelling like a rose? Has the Schitt’s Creek TV show been cancelled? Renewed for a seventh season on Pop? The television vulture is watching all the latest cancellation and renewal news, so this page is the place to track the status of Schitt’s Creek, season seven. Bookmark it, or subscribe for the latest updates. Remember, the television vulture is watching your shows. Are you?

Airing on CBC in Canada and Pop in the United States, Schitt’s Creek stars Eugene Levy, Catherine O’Hara, Daniel Levy, Annie Murphy, Chris Elliott, Jennifer Robertson, Emily Hampshire, Dustin Milligan, Tim Rozon, and Sarah Levy. The Canadian sitcom centers on the once wealthy Rose family, who lost nearly everything, when the government collected on years of back taxes. Their only retreat is the backwater town of Schitt’s Creek, the family’s last remaining asset. Over the years, while plotting to regain their fortune and status, the family’s learned to live with the locals and may even have found some happiness.

The sixth season of Schitt’s Creek averaged a 0.14 rating in the 18-49 demographic and 375,000 viewers. Compared to season five, that’s up by 96% in the demo and up by 89% in viewership. Find out how Schitt’s Creek stacks up against other Pop TV shows.

We don’t have to wonder if CBS and Pop will cancel or renew Schitt’s Creek for season seven since it’s already been announced that season six is the end. Could the characters return someday? I’ll update this page with breaking developments. Subscribe for free alerts on Schitt’s Creek news.

What do you think? Do you think that the Schitt’s Creek TV show should have been renewed for a seventh season? Is this a good time to end the show?