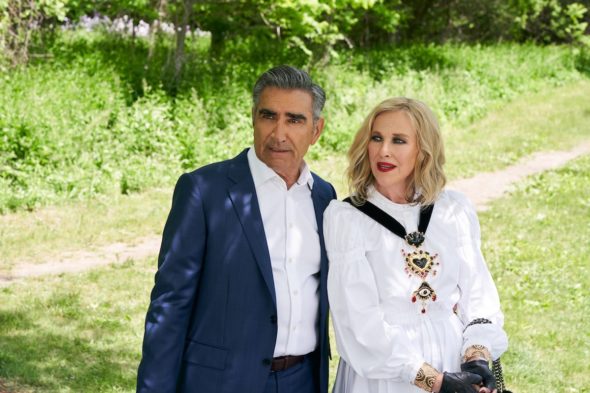 What’s in store for the Schitt’s Creek finale? Recently, stars Eugene Levy and Catherine O’Hara spoke with Variety about the end of the Pop TV show.

The series finale of Schitt’s Creek premieres on Pop tonight, April 7th, at 8 p.m. ET/PT. So what can fans expect from the last episode? O’Hara said she cried when she read the script:

I watched the last episode, and then I texted Annie to say how much I loved her and Dustin in that episode, and to congratulate her. She said, “It made me teary-eyed, and I’m starting to really miss everybody.” I said, “Oh, that did it to me too!” In fact, I had a dream that night that I was crying to Annie that I wasn’t involved in her life anymore!”

And why end the show now? Levy told Variety it’s good to end while you’re at the top:

I’ve never experienced an audience so incredibly behind and in love with these characters. If you’re just looking at it as a job, it was the absolute best. You loved going into work every day with this cast, and we always had a great production team and crew. This could have gone on until the end of time. The smart thing to do is to get out while the going’s good.”

What do you think? Do you watch Schitt’s Creek? Are you excited for the finale?

I’m sad that schitts creek will be ending. I love, love this show.. when I watch this show I forget everything that going on in the world..

No, I personally don’t want Schitt’s Creek to end, because it’s been the tv series that’s been my saving grace. I watched it from the very beginning, Dan & Eugene Levy used to follow me on Twitter. Schitt’s Creek has made me laugh & cry. My husband fell in love with the show after I introduced him, however he never seen the last two seasons before he passed away in a tragic accident. I will certainly miss the Best of the Best!