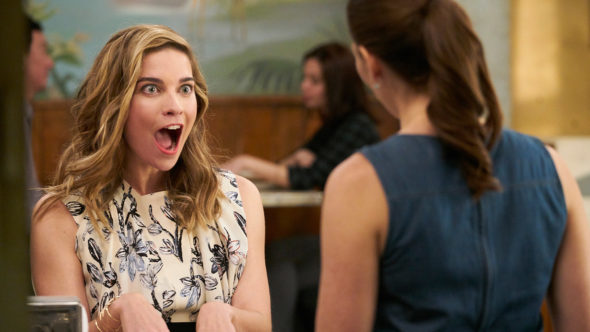 Some bittersweet news for fans of Schitt’s Creek. Pop just announced the TV show has been renewed for a sixth and final season.

The sixth and final season of Schitt’s Creek is slated to debut on Pop in 2020.

SCHITT’S CREEK” RENEWED FOR ITS SIXTH AND FINAL SEASON

TORONTO – March 21, 2019 – SCHITT’S CREEK co-creators Daniel Levy and Eugene Levy announced today that the hit comedy series returns for its sixth and final season in 2020. The sixth season is currently in pre-production and begins shooting in a few weeks.

Co-creators Daniel Levy and Eugene Levy posted a statement to fans announcing the news and explaining their decision:

To Our Dear Fans,

We are very excited to announce that Schitt’s Creek is coming back for a sixth season on CBC and Pop in 2020! We also wanted to take this opportunity to let you know that we’ve decided season six will be our last. We are so grateful to have been given the time and creative freedom to tell this story in its totality, concluding with a final chapter that we had envisioned from the very beginning. It’s not lost on us what a rare privilege it is in this industry to get to decide when your show should take its final bow. We could never have dreamed that our fans would grow to love and care about these characters in the ways that you have.

We are all so excited to begin shooting these last fourteen episodes and can’t thank you enough for the overwhelming love and generosity you’ve shown us. We hope you continue to enjoy the rest of our fifth season as we prepare to shoot our sixth!

“Dan and Eugene have created a brilliant and irreverent series that has struck a powerful chord with audiences in Canada and around the world, fuelled by stellar writing, sharp humor, an outstanding cast and a wardrobe for the ages,” said Sally Catto, General Manager, Programming, CBC. “The show’s reversal-of-fortune storyline has been mined not just for comedy but to share an empowering message about acceptance and authenticity. We couldn’t be more proud to have commissioned this original comedy and respect the team’s creative decision to wrap up the series at a time that feels right for them. Congratulations to the entire cast and crew on their achievement and contribution to Canadian comedy legacy.”

“SCHITT’S CREEK is that rare zeitgeist show that creates incredible fandom, catalyzes culture, and receives best-of-television critical praise for its intelligence, character development, laughter and heart,” said Brad Schwartz, President of Pop. “SCHITT’S CREEK has given all of us a joyous gift that, in my opinion, places the show among the very best. Everyone at Pop could not be more proud than to have been associated with what Dan Levy and Eugene Levy created alongside this amazing cast and crew. While we will miss this gem with all our heart, we are thrilled that the show will end its run exactly as the show’s creators intended.”

What do you think? Do you watch Schitt’s Creek? How do you want the series to end?

Just love this series. The best cast and storyline that I have personally seen in a very long time. That’s saying something with all that there is out there to choose from. Although they say that “all good things must come to an end”, I will miss this show. BRAVO Levy’s!