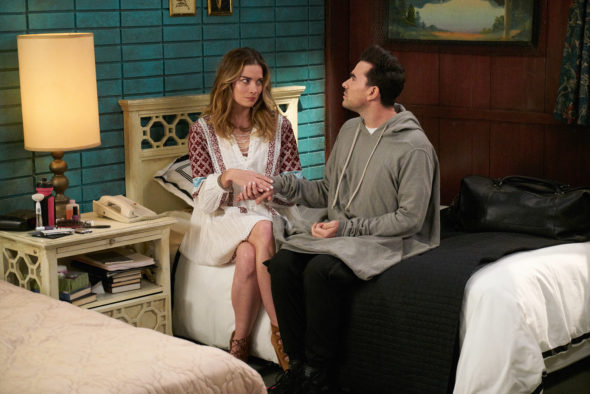 Do the Roses get through the fifth season of the Schitt’s Creek TV show on Pop smelling like a rose? As we all know, the Nielsen ratings typically play a big role in determining whether a TV show like Schitt’s Creek is cancelled or renewed for season six. Unfortunately, most of us do not live in Nielsen households. Because many viewers feel frustration when their viewing habits and opinions aren’t considered, we’d like to offer you the chance to rate all of the Schitt’s Creek season five episodes here. *Status update below.

A Pop fish out of water comedy from Eugene and Daniel Levy, Schitt’s Creek stars Eugene Levy, Catherine O’Hara, Daniel Levy, Annie Murphy, Chris Elliott, Jennifer Robertson, Emily Hampshire, Dustin Milligan, Tim Rozon, and Sarah Levy. The Canadian sitcom centers on the once wealthy Rose family, who lost nearly everything, when the government collected on years of back taxes. Their only retreat is the backwater town of Schitt’s Creek, the family’s last remaining asset. Now they’ve got to learn to live with the locals, while they plot to regain their fortune and status.

What do you think? Which season five episodes of the Schitt’s Creek TV series do you rate as wonderful, terrible, or somewhere between? Should Pop and CBC cancel or renew Schitt’s Creek for a sixth season? Don’t forget to vote, and share your thoughts, below.

*3/21/19 update: Schitt’s Creek has been renewed for a sixth and final season on CBC and Pop.

We love this show we found it one night years ago stayed up all night watching the session and now all our friends and family watch it ! I hope it stays on there really is nothing on TV anymore that makes us laugh.

I love this show. I hope it NEVER ends!

I recently found the show through Netflix and am hooked! I would love to see a 6th season to wrap up the characters and send them off into the sunset with a smile. This is a sweet, charming and funny show with such beautifully kind interactions (sometimes) between family and friends. Stevie Budd needs a real love and so does Twyla (whatever happened to the baker who adored her?) The show is gaining traction through it’s Netflix audience so hopefully that’s enough to bring in a justifiable profit for the network. Fingers crossed for just a few more nights at… Read more »

Love the show! I binge at least 5 episodes every night before I go to sleep. It’s quite clever -I love the humor and I love the sentiment it offers from time to time. Please renew for a 6th season!

This is such a great show I’m super obsessed. Keep it going forever!!

LOVE Schitt$ Creek!!!!!!! My daughter and I have been watching from the beginning!!!!! Never miss an episode!!!!

I don’t like what they’re doing to Stevie Budd this season. She deserves much better than this forced fake relationship with a guy.
Emily deserves better storyline as an actress. If they won’t stop humiliating her like this, I may quit watching the show.

Obsessed with Schitt’s Creek from the very first episode! The cast,the stories,the fashion and the Jokes!

Love, love, love this show!!! Its off-beat humor is what makes it so funny. PLEASE RENEW!