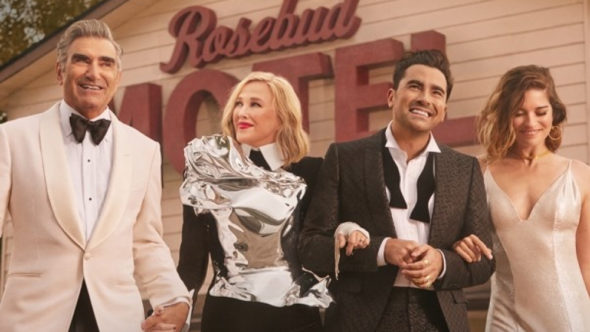 Schitt’s Creek is ending its run, but could fans see the cast and characters return for more at a later date? Dan Levy spoke about the possibility during an episode of Watch What Happens Live, and he is giving fans of the series some hope.

Levy said that the possibility of the series returning in a few years for a movie is definitely possibility. He said, yes, if they can come up with an idea and bring everyone back together.

Check out Dan Levy talking about a return for the series in a clip from WWHL below.

What do you think? Are you a fan of Schitt’s Creek? Would you want to see more of the series a few years down the road?

Please please bring back Schitts creek. Absolutely the greatest show to watch. We can’t get enough of all the characters on the show. Makes us laugh all the time. Please come Back for more seasons. Thanks

Please, please bring back this series!!! EVERYONE I talk to absolutely loves this show! And I think its followers will be dedicated way beyond COVID-19! Thank you!

Eugene, David, please do not stop making this crazy, fun series. I am begging, pleading. What did I do to deserve this exodus? But, seriously. I have come to the harsh realization that we don’t live in a 3 channel VHF world. I never had the opportunity to watch POP TV channel before. I got a Roku in December, it lends itself to the best navigation. It was on Roku, where I found the banner ad for Schitts Creek. I adored the genius of SCTV. And now 40 years later, Eugene, Catherine, David, Chris, Annie, Emily, Sara, Jennifer and the… Read more »

Love this show please bring back for another season. We need shows like this that make you laugh.

Please bring schists creek back for one more season. It’s an amazingly funny and topical show. The actors are wonderful

My family and I just LOVE the show!!!
Catherine O’Hara and Eugene Levy truly amaze!!!
Please give us MORE SCHITT’S CREEK!!!