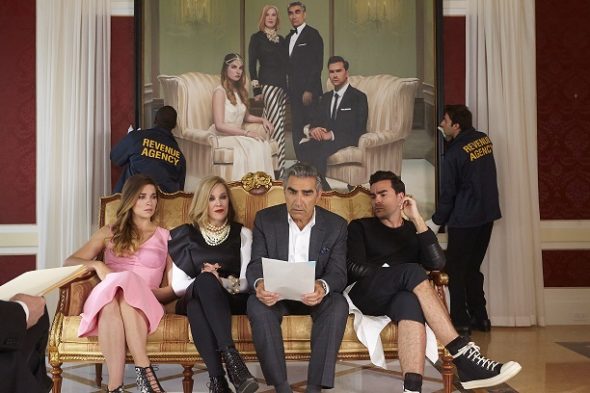 TV show description:
A Canadian comedy series from creators Eugene Levy and Daniel Levy, the Schitt’s Creek TV show centers on the once wealthy Rose family. As the story begins, we learn that their business manager has run away with their fortune and the government collects on years of back taxes by taking most of their personal belongings. Their only retreat is the town of Schitt’s Creek, the family’s last remaining asset.

Patriarch Johnny Rose (Eugene Levy) amassed his fortune as a video-store tycoon. Now on the skids, he and his wife, Moira (Catherine O’Hara), and their kids have to settle down in the backwater burg he once bought for their son, David (Daniel Levy), as a joke.

While these fishes may not be out of water, they’re certainly in unfamiliar waters. Now that life in the lap of luxury lingers only in their memories, the Roses have to learn how to be a real family.

Johnny wants to reclaim his images as a successful CEO, so he instructs his family not to indulge in “low-bottom” behavior, and tries to figure out how to elevate Schitt’s Creek above its “cheap-ass” standing. Living in the Schitt’s Creek Motel makes it a challenge to feel like the head of the family. Still, he loves Moira, and is determined to protect his kids, David and Alexis (Annie Murphy).

Moira and Johnny first met when she took part in the ribbon-cutting ceremony at one of his stores. She was a big soap opera star back then, and their marriage has been a good one.

When Moira starred on Sunrise Bay, her character was famous for slapping others. Now life has slapped her right in the kisser, and she retains only a few of her treasures, among them her large collection of wigs. A drama queen at heart, Moira loves to sing in front of others, and she never shies away from a martini or an antidepressant.

David, who received Schitt’s Creek on his 18th birthday, once spent his days as a New York City gallerist. Now ensconced in a motel room with his sister, he realizes how few true friends he cultivated.

David soon befriends Stevie Budd (Emily Hampshire), the Schitt’s Creek Motel receptionist. They’re kindred spirits in their own misanthropic way, and snarky Stevie helps David work through some of his culture shock. Still, he has a touch of OCD, flirts with hypochondria, and several phobias, some of which encompass insects, germs, plaid, intimacy, and nature.

Once a socialite with the world at her feet, Alexis didn’t pay much thought to a career. Her résumé includes a brief stint as a child actor and launching an edible nail polish line.

The dating pool in Schitt’s Creek is neither deep nor wide, but Alexis does hang out with Mutt Schitt (Tim Rozon), whom she met while doing community service. Although she’s a gossip, she also has a soft heart, which gets her in trouble, sometimes.

Mayor Roland Schitt (Chris Elliott) is descended from the family which founded the town, many of whom held his current office, before him. To him, “If it is broke, don’t fix it,” is as viable a strategy as, “If it ain’t broke, don’t fix it.”

Roland is married to Jocelyn (Jennifer Robertson) now, but was something of a tomcat in his younger days, and tries to make sure everyone knows. He tends to think his office gives him power over anything he chooses. He’ll gladly skirt the rules for friends and makes it a point to remind Johnny of that.

As the popular first lady of Schitt’s Creek, Jocelyn is something of a local icon. Her hairstyle — “The Joceyln” — is even available at Jeanine’s Salon. She is bound and determined to make friends with Moira, regardless of Moira’s feelings on the subject.

Dr. Ted Mullens (Dustin Milligan) is Schitt’s Creek’s local medical expert. Sadly, that means the human population is — well, they’re up a creek, since he’s a veterinarian. He indulges in tiny acts of rebellion, like cutting his sandwiches into triangles and putting hats on people’s pets.

Cafe Tropical waitress, Twyla Sanders (Sarah Levy), always offers a friendly face and listening hear to people in need, regardless of how many customers are waiting. She takes great pride in the items she suggested for the menu, including the Surprise-Me Smoothie and the Greens-Free Salad.

Will the Roses ever reclaim their status and fortune, or are they in Schitt’s Creek to stay? Will Schitt’s Creek change them more than they change it? Stay tuned.

Series Finale:
Episode #80 — Happy Ending
David stresses out over the rain on his wedding day, but his family makes it right.
First aired: April 7, 2020.

What do you think? Do you like the Schitt’s Creek TV series? Should this TV show have ended or been renewed for a seventh season on Pop?

Love the cast and storyline. Don’t want it to end yet! Please keep them, making me laugh! I need it!

Please, please pick this show back up!! Why are all the great, funny shows being cancelled? Life needs this comedy, these actors for at least a few more seasons!

Great show but disappointed that there were so few episodes in the last season!

This is a really funny show, keep it going RENEW !!!!