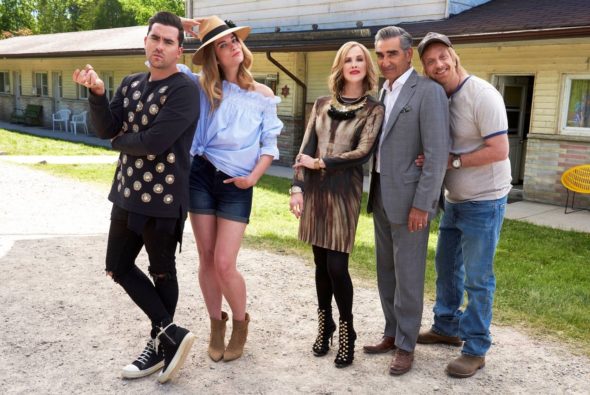 Are you ready for the new season of Schitt’s Creek? TVLine reports season five is coming to Pop in January.

The half-hour comedy centers on the once wealthy Rose family, who lose it all when the government collects on years of back taxes. Their only retreat is the town of Schitt’s Creek, the family’s last remaining asset. The cast includes Eugene Levy, Catherine O’Hara, Daniel Levy, Annie Murphy, Chris Elliott, and Jennifer Robertson.

The Roses are finally thriving in Schitt’s Creek and find themselves ready to take their personal relationships and business pursuits to the next level. Moira returns from a breakthrough film shoot in Bosnia with a clear exit strategy and a renewed sense of purpose, and with that newfound energy, she is inspired to leave her mark on the town by launching her most ambitious artistic endeavor yet. Meanwhile, the reputation of the Rosebud Motel is steadily building under Johnny’s leadership, but managing the individual needs of his staff, Stevie and Roland, proves to be a greater challenge. With Rose Apothecary running smoothly, David is now focusing on nurturing his relationship with Patrick, and from apartment hunting to joining a baseball team, he proves he’s willing to go the extra mile. Alexis, having finally achieved some stability in both romance and career, isn’t one to let things get stale, so she tries to spice things up with Ted while contemplating a next step that could take her beyond Schitt’s Creek.”

What do you think? Do you watch Schitt’s Creek? Are you excited for the new season?

Stumbled upon this show scanning Netflix catalog and found myself falling in love with these shallow self centered characters as they began to grow and see the real world outside of their pretentious Ivory Castle.
All of the family characters and townies living in Schitt’s Creek become endearing and relatable.
Smart writing, excellent character development, top notch acting and good funny story telling grabbed me and held me tight until the last episode available.
Can’t wait for season 5.

I love this show. Some of the smartest writing on TV.

Show is smart and funny! I love all the characters and the story line is captivating. I want Moira’s wardrobe! Thanks for a great season!

I LOVE SCHITT’S CREEK! So looking forward to Season 5 and beyond!!