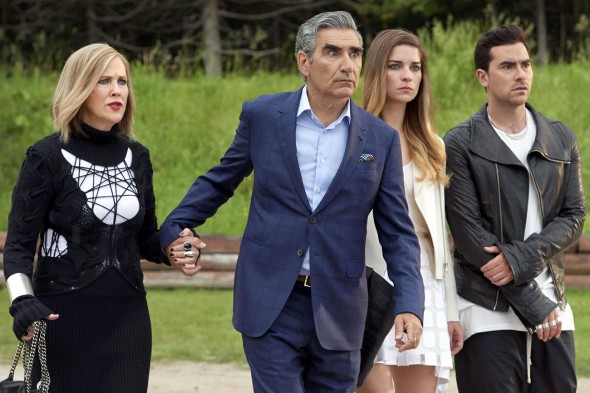 Comedy is coming back to Pop. Today, the network announced the premiere dates for season four of Schitt’s Creek and the new TV show Let’s Get Physical.

Let’s Get Physical “revolves around middle-aged slacker Joe Force (Matt Jones), who makes a reluctant comeback in the fitness industry after his dad, the “Godfather of Aerobics,” unexpectedly passes away and wills Joe the broke-down family gym with eccentric provisions attached to get his actual fortune and estate.” Jane Seymour, Chris Diamantopoulos, and AnnaLynne McCord also star. The comedy premieres on January 24th at 8:30 p.m. ET/PT.

Read more details from Pop below:

LOS ANGELES – Nov. 13, 2017 – Put on those Rose-colored glasses and prepare to laugh through the winter blues with two scripted comedies on Pop that prove (dysfunctional) families rule. Starting Jan. 24, 2018, Wednesday nights on Pop will feature back-to-back comedies, including the critically acclaimed fan favorite SCHITT’S CREEK at 8:00 and 11:00 PM, ET/PT, followed by the original series premiere of LET’S GET PHYSICAL at 8:30 and 11:30 PM, ET/PT.

“SCHITT’S CREEK and LET’S GET PHYSICAL are a perfectly appointed comedy combo that fit like spandex. Both shows are loaded with heart and funny, contemplative characters played by distinctive ensemble casts,” said Justin Rosenblatt, EVP, Original Programming and Development, Pop. “Audiences have already grown to love SCHITT’S CREEK, and we’re thrilled to launch a companion show, LET’S GET PHYSICAL, to deliver an hour of premium scripted comedy on Wednesday nights.”

As season four of SCHITT’S CREEK begins, it seems the Roses have somewhat adjusted to the simple life in Schitt’s Creek, the town that was once a thorn in their side. The family continues to lay down roots in pursuit of love, business and higher education. But of course, what would life for the Roses be without a little self-inflicted crazy? Series co-creators Eugene and Daniel Levy continue as executive producers.

LET’S GET PHYSICAL is a modern-day comedy capturing the zeitgeist of 1980s aerobics. The series revolves around middle-aged slacker Joe Force (Matt Jones), who makes a reluctant comeback in the fitness industry after his dad, the “Godfather of Aerobics,” unexpectedly passes away and wills Joe the broke-down family gym with eccentric provisions attached to get his actual fortune and estate. Janet Force (Jane Seymour) is Joe’s mom, who takes the reins of the family business in order to maintain their legacy and uses information and manipulation to guarantee that things go her way. Upon coming home, Joe faces his rival, Barry Cross (Chris Diamantopoulos), and his teenage love, Claudia (AnnaLynne McCord), who is now Barry’s wife.

LET’S GET PHYSICAL, from studio Entertainment One (eOne), is executive produced by: Michael Rosenberg’s Rosey TV (“Hell on Wheels,” “Hung”), Connor Pritchard’s Inside Center Productions (“Workaholics”), Ben Newmark and Dan Newmark’s Grandma’s House Entertainment and John Morayniss for eOne. Adam Bold, Matt Mazzant and Mike Lopez of Grandma’s House Entertainment also serve as producers. The series was created by the Newmarks and Pritchard. eOne controls the worldwide rights outside the U.S. for LET’S GET PHYSICAL.”

What do you think? Have you seen Schitt’s Creek? Will you watch Let’s Get Physical?

I have enjoyed the show, and am glad to hear that there is a season 4!! I did not know about the show until it hit Netflix. I love to set and watch the show when I need to laugh and feel good about laughing. A comedy like this is rare.