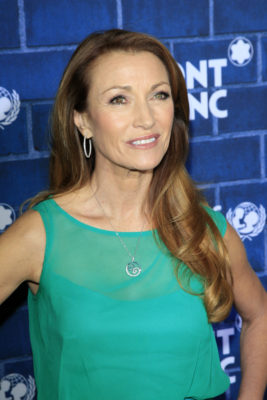 The comedy “centers on slacker Joe Force who makes a reluctant comeback in the fitness industry after his dad, Colonel Tom Force, a.k.a. “The Godfather of Aerobics,” unexpectedly passes away and wills his son the broken-down family gym.”

On Let’s Get Physical, Seymour will play “Janet Force, the mother of the series protagonist, Joe.” She joins fellow cast members Matt Jones, Chris Diamantopoulos, and AnnaLynne McCord. The series is slated to premiere on Pop in 2018.

Seymour stars as Janet Force, the mother of the series protagonist, Joe (played by Jones). Janet is a former Miss Texas Beauty Pageant winner who is obsessed with maintaining the family fitness legacy and anti-aging remedies.

“Speaking as someone who has graced the pages of Jane Fonda’s iconic workout book and actually participated in the aerobics craze that launched a thousand legwarmers, I’m thrilled to be part of this incredibly funny comedy with an incredibly talented cast,” said Seymour.

“Jane is the perfect part of the casting puzzle to make LET’S GET PHYSICAL an original, classy and hysterical comedy,” said Justin Rosenblatt, EVP of Original Programming, Pop.

“Sweet dreams are made of casts like these! With the addition of Jane Seymour, LET’S GET PHYSICAL rounds out its powerhouse cast. We are excited as cameras roll on this hilarious new series,” said John Morayniss, CEO eOne Television.

A multiple Emmy(R) and Golden Globe(R) winner with a star on the Hollywood Walk of Fame, as well as a recipient of the Officer of the British Empire (OBE) in the year 2000, which was bestowed upon her by Queen Elizabeth II at Buckingham Palace, Seymour has proven her talents in virtually all media, the Broadway stage, motion pictures and television.

Her past films include the James Bond movie “Live and Let Die,” the cult classic “Somewhere in Time,” and the comedy smash “Wedding Crashers.” Her television credits include the Emmy(R) Award-winning performance in “Onassis: The Richest Man in the World” as Maria Callas, “East of Eden” for which she was awarded a Golden Globe(R), the mini-series “War and Remembrance” and her Golden Globe(R) winning role as Dr. Quinn on “Dr. Quinn Medicine Woman,” which ran for six seasons. She also guest starred as the original “cougar” in “How I Met Your Mother,” a role that underscored Seymour’s comedic talent.

In addition to acting, Seymour has written over a dozen books including The Wave, Open Hearts Family, Among Angels, Open Hearts, Making Yourself At Home, and Remarkable Changes. Her love of art and color has led to her great success as a painter in watercolors and oils, as a sculptor and as a designer.

LET’S GET PHYSICAL is executive produced by: Michael Rosenberg’s Rosey TV (“Hell on Wheels,” “Hung”), Connor Pritchard’s Inside Center Productions (“Workaholics”), Ben Newmark and Dan Newmark of Grandma’s House Entertainment, and Adam Bold and John Morayniss for eOne. Matt Mazzant and Mike Lopez also serve as producers. The series was created by the Newarks and Pritchard. eOne controls the worldwide rights outside the U.S. for LET’S GET PHYSICAL.”

What do you think? Are you a fan of Jane Seymour? Will you watch Let’s Get Physical?

Love Jane Seymour, not sure if this network comes to my area, We will see!