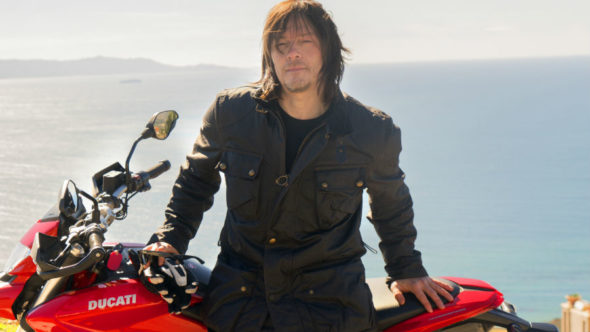 AMC is hittin’ the road once again. Today, AMC announced they’ve renewed Ride with Norman Reedus for a third season.

The docuseries follows the Walking Dead star “as he hits the pavement with friends and special guests, riding across the United States and abroad.” Season two guests will include Jeffrey Dean Morgan, Dave Chappelle, and Mario Batali.

Season two of Ride with Norman Reedus premieres on AMC on November 5th at 11 p.m. ET/PT. Season three is slated to debut in 2018.

NEW YORK, NY – September 12, 2017 – AMC today announced the renewal of “Ride with Norman Reedus” for a third season, slated to air in 2018. Season three will continue the journey with Norman as he hits the pavement with friends and special guests, riding across the United States and abroad. Season two of “Ride with Norman Reedus” premieres as a special two-night television event starting on Sunday, November 5th at 11pm ET/PT, followed by a second episode the next night on Monday, November 6th at 9:00pm ET/PT, in its regular time slot.

“There’s not much I love more than riding my bike on an open road with good friends,” said Reedus. “The fact that I get to do that as my job is a dream come true. I’m super stoked for people to watch the upcoming season and can’t wait to start shooting three soon.”

“Ride with Norman Reedus” follows “The Walking Dead” star and motorcycle enthusiast Norman Reedus as he hits the open road to explore local biker culture and celebrate the best and brightest collectors, mechanics and craftsmen around the country. Each episode features Reedus and a riding companion as they journey across an unknown terrain and experience the culture surrounding them… with plenty of time for unplanned detours and tire changes.

What do you think? Have you seen Ride with Norman Reedus? Are you glad it’s been renewed?