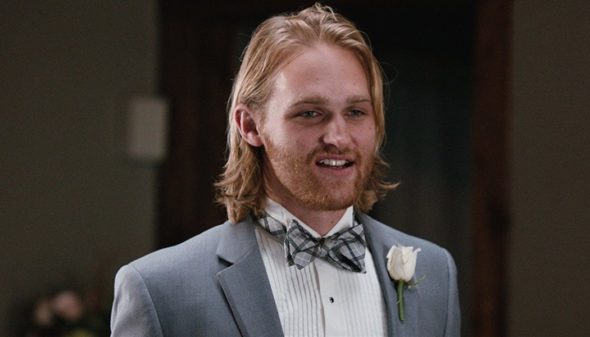 AMC is headed back to the lodge. Today, the network announced they’ve renewed Lodge 49 for a second season.

The season one finale debuts on AMC on Monday, October 8th, at 10 p.m. ET/PT.

NEW YORK, NY, October 4, 2018 – Ahead of its season one finale, AMC today announced that it has renewed its critically acclaimed modern fable “Lodge 49” for a second season. Wyatt Russell (“Black Mirror,” “Everybody Wants Some”) will reprise his starring role as Sean “Dud” Dudley. Creator, writer and executive producer Jim Gavin returns as does Peter Ocko (“Pushing Daisies,” “The Office”) as executive producer and showrunner. Additional executive producers include Paul Giamatti (“Billions,” Sideways, “Outsiders,” “Hoke”), Dan Carey (“Outsiders,” “Hoke,” John Dies at the End, All Is Bright), and Jeff Freilich (“Halt and Catch Fire,” “Grace and Frankie”). The second season of “Lodge 49” will go into production and will air on AMC in 2019 with 10 episodes. “Lodge 49” is an AMC Studios production.

Already making many critic’s “best of” lists, the season one finale of “Lodge 49” airs Monday, October 8th on AMC.

“Lodge 49” is a light-hearted, endearing modern fable set in Long Beach, California about a disarmingly optimistic local ex-surfer, Dud (Russell), who’s drifting after the death of his father and collapse of the family business. Entertainment Weekly said of season one, “AMC’s ‘Lodge 49’ is one of the brightest-looking shows on TV.” The Hollywood Reporter said, “It’s hard not to root for a series like Lodge 49…partly because it’s shot full of the kind of optimism and whimsy you rarely see,” Variety said, “It doesn’t just defy easy categorization as a TV show unto itself; it defies expectations of what an AMC series might, or should, look like…” “Lodge 49’s” first season is currently available on AMC Premiere, AMC.com, On Demand platforms and the AMC app.

“‘Lodge 49’ tells a funny, wise and meaningful story that immediately and deeply resonated with critics and viewers alike,” said David Madden, president, programming, AMC, SundanceTV, and AMC Studios. “With a talented cast including Wyatt Russell, Brent Jennings and Sonya Cassidy, along with our strong creative team led by Jim Gavin and Peter Ocko, we are particularly proud of this series from both an AMC network and AMC Studios perspective and are looking forward to a return trip to the ‘Lodge.'”

“‘Lodge 49’ is a joy to make. Its passionate audience seems to have caught on that there’s nothing else like it on TV,” said Peter Ocko. “Jim and I are thrilled to keep telling these stories and are lucky to have found such an incredibly supportive home at AMC.”

“I feel so lucky to be working with AMC, which has shown such faith in ‘Lodge 49,’ and I can’t wait to jump back in with our amazing cast,” said Jim Gavin.

“We are immensely pleased and excited to continue exploring the fabulous world inside and outside of ‘Lodge 49,’ guided by Jim Gavin, Peter Ocko and the Luminous Knights at AMC,” said Paul Giamatti.

In season one, Dud found himself on the doorstep of a rundown fraternal lodge, where a middle-aged plumbing salesman and “Luminous Knight” of the order welcomes him into a world of domestic beer, easy camaraderie and the promise of Alchemical mysteries that may – or may not – put Dud on the path to recover the idyllic life he’s lost.

What do you think? Have you seen Lodge 49? Will you watch season two?

Such a great and clever show! The writing is awesome and listen past the obvious, there are so many interesting references you may not catch, but they are imbedded in the dialog. A great ramble into the comedy and tragedy that is the spinning web of life, plus super great characters, a bit of magic and mystery. Everyone has a backstory here….so fun!

A nice, light, fun show! Pretty refreshing compared to what else is out there! Glad it’s been renewed.

I watched only the first two episodes of this show. I could not take anymore. This is one of the stupidest shows ever made. There are actually better ways of wasting your time than this.
For instance (twiddling your thumbs, helping a friend move only because you have a truck.)

I love this show, please keep it going.

Excited to watch season two! The first couple episodes of season one seemed to be a little slow or even somewhat strange. From episode three I was hooked and the excellent season finale tied it all together.

Absolutely will watch again!! Love it and will be sorely disappointed if it gets canceled!! Best follow up to Better Call Saul!!

Great show, very happy they kept it. Reminds me of John from Cincinnati, deep and thoughtful, yet it doesn’t take a serious stance. A pure joy to watch

Worse show ever. And Lucifer got cancelled. And you keep that crap. Who makes these decisions Mickey mouse