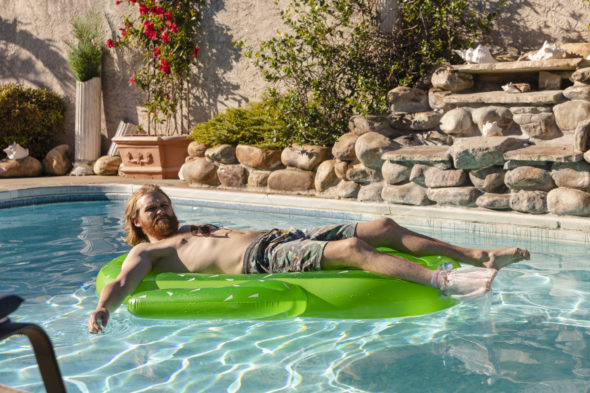 What do you think of Dud’s journey during the first season of the Lodge 49 TV show on AMC? As we all know, the Nielsen ratings typically play a big role in determining whether a TV show like Lodge 49 is cancelled or renewed for season two. Unfortunately, most of us do not live in Nielsen households. Because many viewers feel frustration when their viewing habits and opinions aren’t considered, we’d like to offer you the chance to rate all of the season one episodes of Lodge 49 below.

What do you think? Which season one episodes of the Lodge 49 TV series do you rate as wonderful, terrible, or somewhere between? Should AMC cancel or renew Lodge 49 for a second season? Don’t forget to vote, and share your thoughts, below.

Renew this show PLEASE!! It’s so quirky yet so well written….Wyatt Russell is phenomenal..this show definitely is the right kind of weird

I hope this show gets canceled! Worst show on TV! MMaks free masons look stupid; and its just a stupid show! Bring back good shows like “Game Of Arms”!! I never thought AMC could produce a show that sucks so badly.

One of my favorite shows! Funny and suspenseful at the same time. Please renew the show

One of the most refreshingly original shows I have seen on TV. And honestly, this is so California at its best. Cosmic, funny, poignant, great story line, fascinating really, and the cast is charming.

Absolutely one of the best TV shows of all time already, up there with Twin Peaks, Breaking Bad, Sense 8, Terriers, Better Call Saul, Preacher,American Gods….you name it, this show is stellar. Just renew it already!

I just finished watching season 1 and I thought it was one of the best shows I’d seen in a long time. So much, so creatively much going for it. So much warmth and so much mystery. Such great genuine characters, and much love. Gotta be renewed!!

My wife and I look forward to each new episode. We are constantly trying to focus on clues as to the real meaning of the Lodge and it’s characters. The writing is very creative. The acting is superb. There are so many tangents that appear unrelated until the are exposed. The scene at the gas station with Dud unobservant of the action at the pumps is brilliant. The simplicity of reactions to havoc around the characters is fresh and creative. They need time to build an audience and if the numbers don’t reflect that, use whatever tools are available. The… Read more »