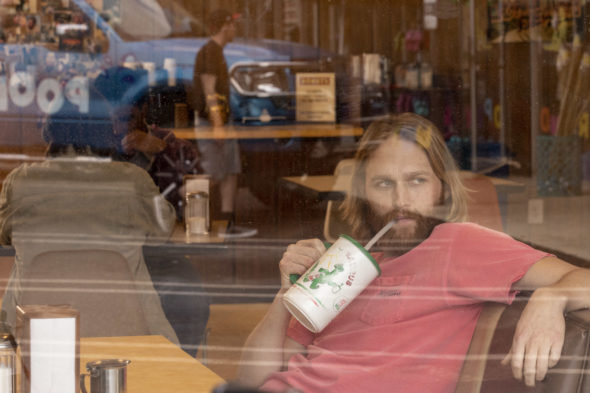 Can Dud keep the lodge together? Has the Lodge 49 TV show been cancelled or renewed for a third season on AMC? The television vulture is watching all the latest cancellation and renewal news, so this page is the place to track the status of Lodge 49, season three. Bookmark it, or subscribe for the latest updates. Remember, the television vulture is watching your shows. Are you?

A philosophical AMC comedy-drama, Lodge 49 stars Wyatt Russell, Brent Jennings, Sonya Cassidy, Linda Emond, David Pasquesi, and Eric Allan Kramer. The series centers on Sean “Dud” Dudley (Russell), an aimless former surfer who has been floundering through life. Following the death of his father and failure of the family business, Dud joins a mysterious fraternal retreat which offers cheap beer and strange alchemical philosophies. Now, thanks to the Ancient and Benevolent Order of the Lynx and its members, he starts to find a sense of purpose and begins to acknowledge both his hopes and fears. In season two, with “the Lynx” under bad leadership, Dud thinks it is up to him to revive the Lodge.

Will AMC cancel or renew Lodge 49 for season three? The ratings were way down so I’m not expecting a renewal. I’ll update this page with breaking developments. Subscribe for free Lodge 49 cancellation or renewal alerts.

What do you think? Were you hoping that the Lodge 49 TV series would be renewed for a third season? Are you sorry that AMC cancelled this TV show, instead?

I am beside myself. Why does AMC always cancel their coolest shows? I swore AMC would not do it to me again after The Killing debacle. They just don’t advertise their most awesome products properly. Lodge 49 is a goofy fun show.

We loved this show, Dud’s hope was infectious. Characters were great, especially Dud & Ernie. So sorry to hear the run may be over.

This is Crap AMC did not give it a chance to work and did not replay it at all , never pushed it . They wanted it to fail . It was a great show It had everything , something for everyone , they need new polls

I am so sad that this absolute treasure of a show wasn’t renewed by AMC or has yet to be grabbed up by another company. It’s the kind of show that comes around one in a lifetime! My husband and I never missed an episode and we enjoyed it very much. I still hold great hope in my heart that timing and all the right things will once again align to bring Lodge back to screens in order to continue the fantastic story with this perfectly balanced cast for us all to love. It’s magical, charming, and we want more!!

I’m very upset! Lodge 49 was unique, funny, quirky, emotional ,perfect for a network like AMC! WHAT a LOSS! It was never given a chance to be seen, word of mouth is how I found the walking dead, breaking bad, the Sopranos and OZ many years ago. Poor advertising killed it. A great cast. It seems only violence and dark weird shows are pushed on us now. I love dark and weird but Lodge 49 was a refreshing break, an odd mix I’d absurd, emotional and funny.

Bring it back. Please!

I am very disappointed Lodge 49 has been cancelled. I looked forward to Lodge 49 all week. It was one of very few tv shows I actually found mind stimulating for it’s unique independent characters, their fun adventures and their quest to find answers to the big mystery. I throughly enjoyed all the characters and of course the story. I miss it very much and would love to see a season 3 and more.
Please bring this tv show back. Thank you very much!

i’m saddened but not overly surprised. viewership was down across the board, and I mean ALL of their shows. Live TV is going out of style I think. I watched season 1 in real time. Not too long afterwards I cancelled cable and made the switch over to streaming sites, all of them except for Disney+ and that increasingly seems to be becoming the standard. too pricey. too many commercials. even bad weather… streaming services aren’t hindered by bad weather. keep your fingers crossed though. SyFy cancelled ‘the expanse’ and Amazon Prime Video picked it up, filming a 4th season,… Read more »

We need more shows like this where you have to think a bit , tired of the same old sitcoms Dud and Liz ARE GREAT CHARACTERS , I hope the show finds a new home AMC has done this with other good shows low ratings poor excuse

Make season 3, please!!!!!!!!! There’s so much creative potential to continue the story!!!

This show is truly one of the greatest pieces of TV ever. Please bring it back!!!! Each ep. has you questioning if it’s all real or not?!? What secrets does the True Lodge have, if you never let them finish this story it will be a terrible day for television.

I totally agree! What a shame!

Please renew this wonderful show. It is full of whimsy and heart, unlike any other show currently on TV. Many of us need to discover what comes next for Dud and Liz as well as the other well drawn characters.

I love this show! For a jaded 50 something that’s saying a lot! Even the theme song makes me happy. I want to hug Dud every time I see him. Please renew this show or at least find it a new home. It needs at least two more seasons to answer all my questions lol. I’ve never been hooked on a show like I have Lodge 49. Quirky characters, crazy situations, it gets me every week. I’m really busy so I’d dvr two or three episodes and binge when I could. I hope it didn’t hurt the ratings, I’d feel… Read more »