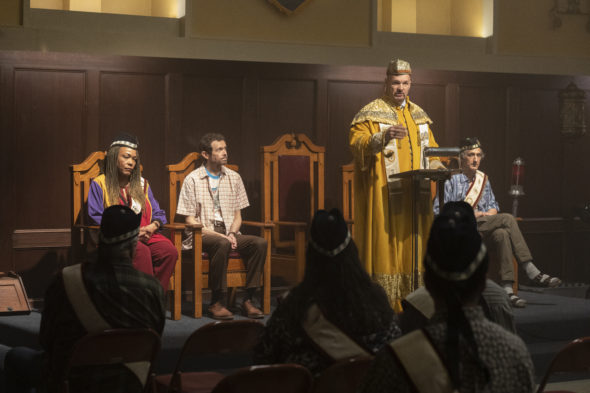 How is Dud doing during the second season of the Lodge 49 TV show on AMC? As we all know, the Nielsen ratings typically play a big role in determining whether a TV show like Lodge 49 is cancelled or renewed for season three. Unfortunately, most of us do not live in Nielsen households. Because many viewers feel frustration when their viewing habits and opinions aren’t considered, we’d like to offer you the chance to rate all of the season two episodes of Lodge 49 below. *Status update below.

An AMC drama, Lodge 49 stars Wyatt Russell, Brent Jennings, Sonya Cassidy, Linda Emond, David Pasquesi, and Eric Allan Kramer. The series centers on Sean “Dud” Dudley (Russell), an aimless former surfer who has been floundering through life. Following the death of his father and failure of the family business, Dud joins a mysterious fraternal retreat which offers cheap beer and strange alchemical philosophies. Now, thanks to the Ancient and Benevolent Order of the Lynx and its members, he starts to find a sense of purpose and begins to acknowledge both his hopes and fears. In season two, with “the Lynx” under bad leadership, Dud thinks it is up to him to revive the Lodge.

What do you think? Which season two episodes of the Lodge 49 TV series do you rate as wonderful, terrible, or somewhere between? Should AMC cancel or renew Lodge 49 for a third season? Don’t forget to vote, and share your thoughts, below.

I love this show and was sorry to hear its viewership was so poor and that there would be no season 3. Such a unique story with fabulous lore pulled from shamanism, Jungian alchemy, tarot. And a strange mixture of the terrible workings of soulless corporate America and the camaraderie and solace given by this obscure and almost obsolete brotherhood or fraternal lodge. And Wyatt Russell, Brent Jennings, Sonya Cassidy, and the other players really did make a sweet alchemy. I also tried to get all my friends and family to watch and over and over they had never even… Read more »

Season 1 was excellent. Season 2 has been bogged down with slow moving episodes and no real direction until the latter episodes. Not surprised it was cancelled.