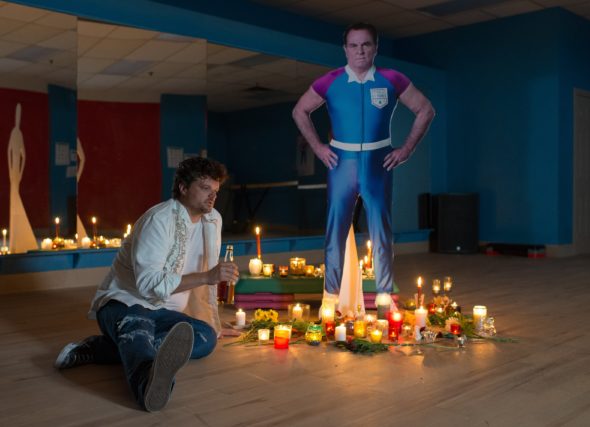 Can Joe Force get what’s coming to him? Has the Let’s Get Physical TV show been cancelled or renewed for a second season on Pop? The television vulture is watching all the latest TV cancellation and renewal news, so this page is the place to track the status of Let’s Get Physical, season two. Bookmark it, or subscribe for the latest updates. Remember, the television vulture is watching your shows. Are you?

We’re new to tracking the ratings of Pop TV series so, even with the numbers (which are very, very low), it is a little tricky to predict whether Pop will cancel or renew Let’s Get Physical for season two. Right now, my gut tells me that it will be cancelled. The ratings have been truly terrible. I’ll update this page with breaking developments. Subscribe for free alerts on Let’s Get Physical cancellation or renewal news.

What do you think? Did you hope the Let’s Get Physical TV show would be renewed for a second season? How do you feel, now that Pop has cancelled this TV series, instead?