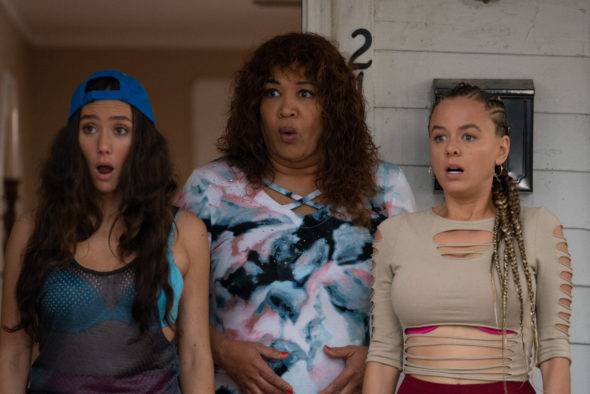 What’s shaking in the Sunshine State? Has the Florida Girls TV show been cancelled or renewed for a second season on Pop? The television vulture is watching all the latest TV cancellation and renewal news, so this page is the place to track the status of Florida Girls season two. Bookmark it, or subscribe for the latest updates. Remember, the television vulture is watching your shows. Are you?

A Pop sitcom, Florida Girls comes from creator Laura Chinn, who also stars with Melanie Field, Laci Mosley, and Patty Guggenheim. It centers on four women who get slapped in the face by their lackluster lives when their one driven friend leaves town in pursuit of her dreams. Shelby (Chinn), Kaitlin (Field), Jayla (Mosley), and Erica (Guggenheim) make quite the motley crew. Still, they stick together as they try to handle whatever life throws at them, while they eke out their existence.

The first season of Florida Girls averaged a 0.03 rating in the 18-49 demographic and 69,000 viewers. Learn how Florida Girls stacks up against other Pop TV shows.

Will Pop cancel or renew Florida Girls season two? Pop’s numbers are pretty small even for a cable network. Like most shows, Florida Girls’ chances of being cancelled or renewed come down to whether Pop feels like it’s getting enough bang for its buck, as well as other things, like how much they want to stay in business with up-and-comer Chinn. I’ll update this page with any developments. Subscribe for free alerts on Florida Girls cancellation or renewal news.

10/4/19 update: Florida Girls has been renewed for a second season on Pop.
3/5/20 update: The show was subsequently cancelled, before season two was produced.

What do you think? Are you upset that season two of the Florida Girls TV series was cancelled by Pop?

PLEASE save Florida Girls!!! This one is definitely worth bringing back!!!

One of the funniest shows on TV. Please save it.