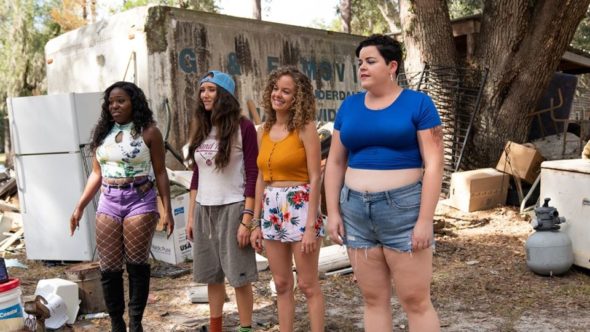 It looks like Florida Girls is headed for early retirement. The Pop TV comedy series was renewed for a second season back in October but now, the cable channel has cancelled its plans to bring the series back.

Florida Girls comes from creator Laura Chinn, who also stars with Melanie Field, Laci Mosley, and Patty Guggenheim. It centers on four women who get slapped in the face by their lackluster lives when their one driven friend leaves town in pursuit of her dreams. Shelby (Chinn), Kaitlin (Field), Jayla (Mosley), and Erica (Guggenheim) make quite the motley crew. Still, they stick together as they try to handle whatever life throws at them, while they eke out their existence.

Variety reports that Pop has decided to pair down its original programming and informed studios that it wouldn’t be moving ahead with new seasons of Flack, Best Intentions, and Florida Girls. Production on two of the shows was expected to begin soon and season two of Flack had already been completed and scheduled. The respective studios will be free to shop the cancelled programs elsewhere.

“Our content strategy isn’t about spending more,” ViacomCBS CEO Bob Bakish said during a ViacomCBS earnings call. “It’s about better aligning the combined company spending with growth potential and maximizing the value of our content, IP and franchises across our now larger asset base.”

What do you think? Did you watch the first season of Florida Girls on Pop? Should it have been cancelled? Will you watch season two if it’s ever produced?

What is POP anyways? Never heard of it till this show bye

Nooooooo!!!!!! I was looking forward to it!! How do they cancel it with so much other crap out there? This was funny and different! I hope it gets picked up by someone else with common sense. They didn’t even market this show!!!! BS

I really hope someone picks up this show for a season 2. It was freaking awesome!

I have been waiting all this time for season 2…. and nothing!! I hope another network picks the show up. I loved it! Maybe a different network will give them more exposure. I have no reason to watch the POP network anymore..

Bring Florida Girls back!!! They bring life and put smiles on people faces. I’m not that young and they are so funny and something new, close to “On My Block” TV show. You are making a mistake, someone will pick up this show or a show with them and you will regret it. These girls are awesome! Period.

huge mistake, POP! I recommended this show to so many people -and I very rarely follow tv series, let alone tell dozens of people spread across many (very) different demographics about one. I didn’t find out the show had been cancelled until people I told to check out the show went to watch it, and then told me on return it had been cancelled. Disappointed, all, I might add. After Schitt’s Creek I thought POP was a network to keep on my radar. After this post, I’ll undoubtedly soon forget about it altogether. Nothing else the network has to offer… Read more »

Love this show! Big mistake dropping this show POP! These girls are hilarious!