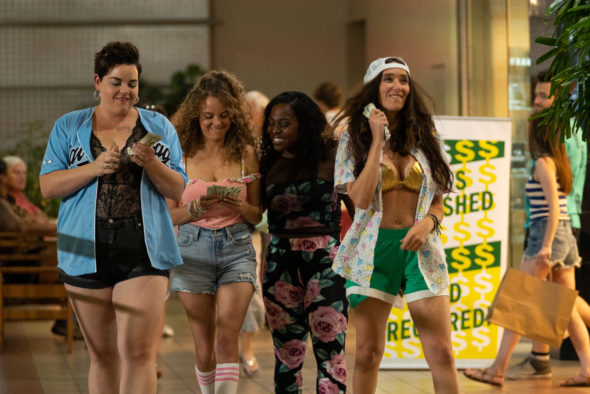 Is the first season of the Florida Girls TV show on Pop better than a day at the beach? As we all know, the Nielsen ratings typically play a big role in determining whether a TV show like Florida Girls is cancelled or renewed for season two. Unfortunately, most of us do not live in Nielsen households. Because many viewers feel frustration when their viewing habits and opinions aren’t considered, we’d like to offer you the chance to rate all of the Florida Girls season one episodes here. *Status update below.

A Pop sitcom, Florida Girls comes from creator Laura Chinn, who also stars with Melanie Field, Laci Mosley, and Patty Guggenheim. It centers on four women who get slapped in the face by their lackluster lives, when their one driven friend leaves town in pursuit of her dreams. Shelby (Chinn), Kaitlin (Field), Jayla (Mosley), and Erica (Guggenheim) make quite the motley crew. Still, they stick together as they try to handle whatever life throws at them, while they eke out their existence.

What do you think? Which season one episodes of the Florida Girls TV series do you rate as wonderful, terrible, or somewhere between? Should Pop cancel or renew Florida Girls for a second season? Don’t forget to vote, and share your thoughts, below.

*10/4/19 update: Florida Girls has been renewed for a second season on Pop.

*3/5/20 update: The show was subsequently cancelled, before season two was produced.

Since Pop has cancelled all of its original series except one. Let’s hope ( fingers crossed ) that another network will pick up this hilarious tv series! HBO? STARZ,? Comedy Central? Hulu? Apple tv? Netflix? Amazon? BRAVO!? C’mon this was one of the best new comedies last season! Honestly the most LOL show I’ve seen in ages! Please someone give us more seasons! Please somebody else pick this show up! It would be a tragedy, to lose such a good, well-written show with an excellent fresh cast of comedic actors to lay offs and cuts by CBS/Via COM.. Give these… Read more »

I can’t believe it’s been cancelled. My favorite show and everyone I know loved it. Probably not hyped enough. By the way, I’m a middle classed, 40 year old female from California

I hope they come back for another season. Love this show! Hella funny

I LOVED EVERY MINUTE. Best thing I have seen in a long time. They were funny and REAL. PLEASE renew this show FOREVER!!