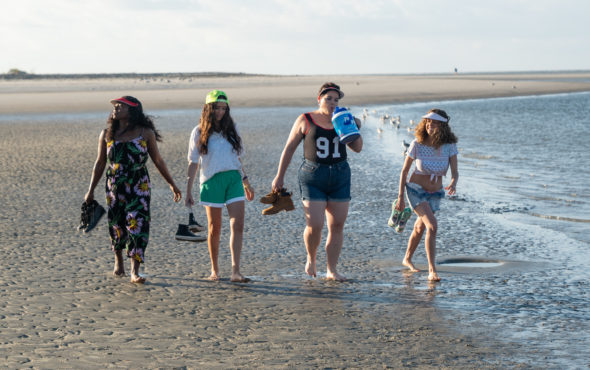 TV show description:
From creator Laura Chinn, who also stars, the Florida Girls TV show is a scripted comedy inspired by Chinn’s experiences growing up on Florida’s West Coast. It centers on four women who get slapped in the face by their lackluster lives, when their one driven friend leaves town in pursuit of her dreams.

Stoner Shelby (Chinn) never seems to make much progress, despite her best efforts. As her family’s utilitarian child and the unofficial group mom, she is used to putting everyone else first, and is inclined to go along with the gang.

On the other hand, Kaitlin (Field) is a leader by nature. The problem is, her sole ambition seems to be partying away her life in Florida. In her opinion, change is bad. She’s satisfied with being a so-so bartender, and is proud of her party girl reputation.

As the hottest girl in the group, Jayla (Mosley) trades on her good looks to get by in life. Rather than trying to further her education or getting a good job, she dreams of marrying a rich, old man who will take care of her. Despite her own lack of direction, Jayla revels in giving others her advice, whether or not they want it.

Finally, there’s Erica (Guggenheim). Neglected for most of her early years, Eric learned to get by however she could. She’ll lie to your face and rob you blind. Despite being high most of the time, she’ll still have your back if someone needs a beating.

Shelby, Kaitlin, Jayla, and Erica make up quite the motley crew. Still, they stick together while they try to handle whatever life throws at them, as they eke out their existence.

Series Finale:
Episode #10 — Island Party: Part Two
After major setbacks, the girls struggle to pull off Kaitlin’s party; Shelby has an existential crisis about her future; Erica teams up with Shelby’s mom to scam a pharmacy.
First aired: August 7, 2019.


What do you think? Do you like the Florida Girls TV series? Should this Pop TV show be cancelled or renewed for another season?

Bring Florida Gorls back please!!!! As a native Floridian living in Utah, it’s my piece of home and it is hilarious!

This is such a hidden gem! Easily one of the funniest shows I’ve ever seen.

I love this show. Sad to see it won’t be back.

I love this show. Sad to hear it won’t be back!

Never heard of this & it doesn’t interest me at all!