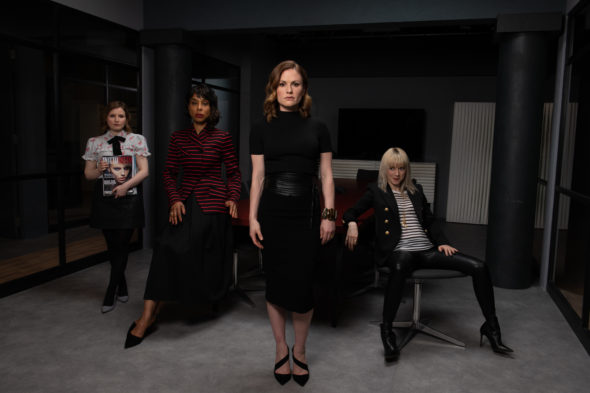 TV show description:
From creator Oliver Lansley, the Flack TV show is a dramedy set in the world of public relations. The story centers on Robyn (Paquin), who excels in her profession, but can’t stop sabotaging herself.

As a crisis PR strategist and publicity expert serving high-profile athletes, entertainers, and fashionistas, Robyn is accustomed to handling tricky, unexpected scenarios at lightning speed. She works in the London offices of Mills Paulson, under agency head Caroline (Okonedo).

Robyn is a true ace when it comes to managing her client’s spectacular screw-ups. Unfortunately, she’s utterly lacking in the ability to get a handle on her own life.

Series Finale:
Episode #12
This episode has not aired yet.
First aired: TBD

What do you think? Do you like the Flack TV series? Should this Pop TV show have been cancelled or renewed for a third season?

Yes, I was planning to watch! This is an edgy, fast paced & witty show! I can’t believe the garbage they keep around is better TV than this??
Bring it back!

I agree with everything Denise said!

I would love to see this show continue! There are no other shows out there like this and I just loved it!! Anna Paquin is such a good actress and is perfect for the role! Please air season 2 and keep it going on after that too!

I would love to see this Incredible series continue it is very different from what is out there at this time. I love it and I want to see more and more and more!

Love this show…actors are great together too. Keep going.