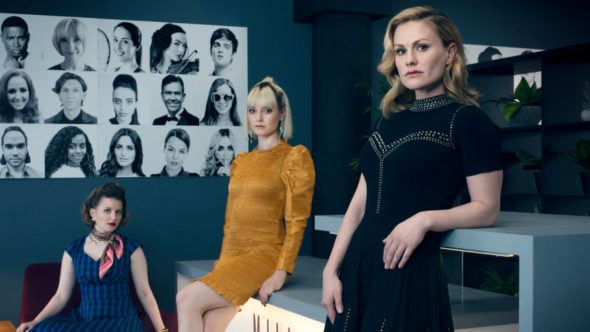 Stop the presses! Flack has found a new home. Season two of the cancelled Pop comedy-drama  TV series has been picked up by Amazon Prime.

The first season of Flack averaged a 0.01 rating in the 18-49 demographic and 48,000 viewers on Pop TV. The six episodes aired in February and March of 2019 in the United States. The show is produced in association with UKTV, a British broadcaster.

While the Pop ratings were low, Flack was renewed for a second season in August 2019 with Daniel Dae Kim and Sam Neill joining the cast. Martha Plimpton, Jane Horrocks, Giles Terera, and Amanda Abbington were added as guest stars.

In March of this year, Pop TV cancelled plans to air season two, a week before it was set to premiere. The six episodes had already been produced so producer Jimmy Mulville said, “It’s sad to end the show on Pop, the first season did well for them and UKTV. I’m confident that we’ll be able to find another home for the show. There’s no shortage of platforms.”

Today, Deadline reported that those efforts have been successful and seasons one and two of Flack will be made available on Amazon Prime’s streaming platform (the first season had previously been available). A date for the U.S. release of season two was not announced but the sophomore season debuted in April of this year on the W channel in the United Kingdom.

It’s understood that Amazon’s deal will allow the streaming service to potentially pick up a third season of Flack.

What do you think? Do you like the Flack TV series? Are you glad that you’ll be able to finally see the second season?

Flack us an awesome..bitingly funny..incredible writing. It like AB FAB being serious..I love this show..the acting is perfect. Directing is off the charts..