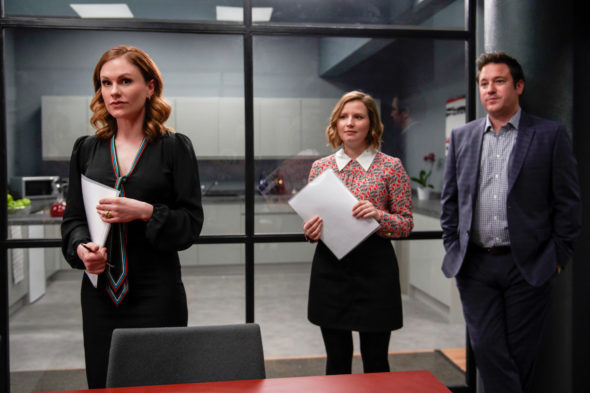 Is the first season of the Flack TV show on Pop TV in need of a PR flack? As we all know, the Nielsen ratings typically play a big role in determining whether a TV show like Flack is cancelled or renewed for season two. Unfortunately, most of us do not live in Nielsen households. Because many viewers feel frustration when their viewing habits and opinions aren’t considered, we’d like to offer you the chance to rate all of the Flack season one episodes here. *Status update below.

What do you think? Which season one episodes of the Flack TV series do you rate as wonderful, terrible, or somewhere between? Should Pop cancel or renew Flack for a second season? Don’t forget to vote, and share your thoughts, below.

*6/12/20 update: Amazon picked up season two of Flack after it was canceled by Pop.

I’m sad and disappointed FLACK won’t be returning for a second season it was one of my favorite shows every single person did an awesome job bringing their characters to life it was real and funny I was glued to my tv for every episode if I had a network and the money to keep it on television i would put my money on it that’s how much faith i had in that show!!

This is an excellent series especially since the lovely and talented Sophie Okonedo is in the cast. Please expand on her character! Please renew.