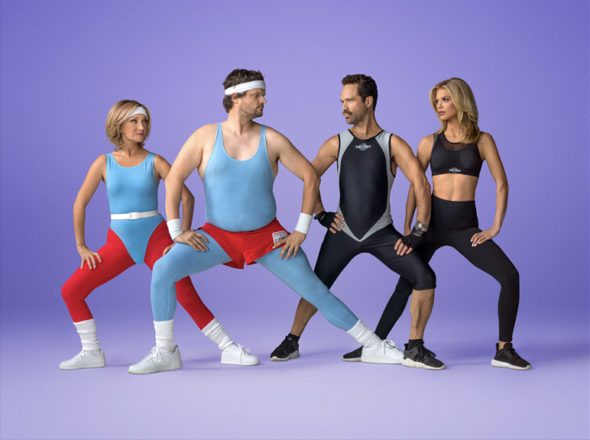 After his father, Colonel Tom Force, aka the “Godfather of Aerobics,” dies unexpectedly, Joe learns the old man left him his gym. Unfortunately, this middle-aged slacker’s father also attached some bizarre provisions to the will. Now, Joe must meet them, in order to get his hands on his inheritance.

A former beauty queen, Joe’s mother Janet (Jane Seymour), takes control of the business, with the goal of preserving the family’s legacy. She’s not above manipulating situations and people, to ensure things work out the way she wants them to.

Now that he’s back home, Joe also has to deal with his old rival, Barry Cross (Chris Diamantopoulos). Barry’s married to Claudia (AnnaLynne McCord), who was Joe’s childhood sweetheart.

Until now, Joe had been spending his time drunkenly crooning for a cover band. Ambition-free, he was content with a life full of sex, drugs, and rock ‘n’ roll. He will only be able to claim the $8 million he has coming to him, if he also snags back the Competitive Aerobics champion title from Barry.

Can Joe meet the Colonel’s challenge? With Janet’s assistance, he throws himself into a quest for his past glory and all that cash, too. Will he succeed? Stay tuned.

Series Finale:
Episode #8, “CAC Fight”
Just before the teams are about to hit the stage at the Competitive Aerobics Championships Finals, Barry reveals Joe and Claudia’s secret deal to the Fitness by Force Team: Claudia will own half of Joe’s gym, no matter what team wins. Tina doesn’t react well to this, hinting at her true feelings for Joe. Later, Barry takes the stage in the Singles competition. The Fitness by Force team is shocked to see Barry has stolen every move from Joe’s routine, including Colonel Force’s top-secret one. In response, Joe pulls out all the stops with a last-minute unorthodox routine – but will it be enough to win? (Courtesy of Pop)
First aired: March 14, 2018

What do you think? Do you like the Let’s Get Physical TV series? Should this TV show have been cancelled or renewed for season two on Pop?

easily one of the stupidest, worst, terribly-written, untalented, totally Unfunny shows EVER!!! Get this Crap OFF the air!!