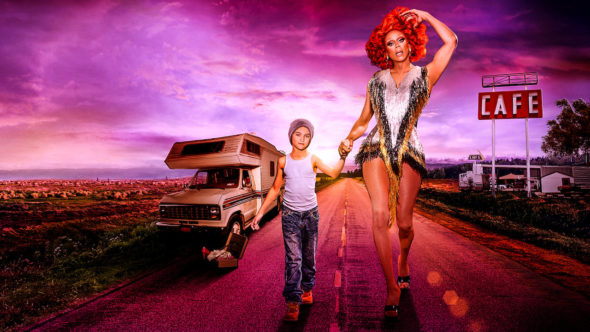 In the story, Ruby Red (Charles) is a bigger-than-life but down-on-her-luck drag queen. She travels across America from club to club in a rundown 1990’s R/V with her unlikely sidekick AJ (G.), a recently orphaned, tough-talking and scrappy 11-year-old stowaway.

As the two misfits — one tall and one small — travel from city to city, Ruby’s message of love and acceptance winds up touching people and changing their lives for the better.

What do you think? Do you like the AJ and the Queen TV show? Do you think it should have been cancelled or renewed for a second season?

It’s a shame it was cancelled. The storyline was great. RuPaul and Izzy’s dynamic made it one of my favourite shows.

I loved it. It should have been renewed.

Def renewed! I enjoyed it and all of the story lines. Wish Netflix or another group would reconsider. Yes it was cheesy but isn’t that what drag is? Always had uplifting messages from each episode.

Absolutely love!! I want to see more! I love Ru Paul❤️ We need to know what happens next!!!

I love, love this series and love the actors! It is so refreshing, full of heart and so entertaining! I hope the series continues!!

This is the best show! It is different but never in a vulgar way in fact it is filled with such kindness and heart. It is interesting and I can’t wait to watch the next episode. I love RuPaul. Great talent!

It should have just been a 90 minute movie (or a 6 part series at max, like Fleabag)
I love RuPaul, but this bad acting mess, with lots of empty space, just dragged on and on….
Kind of feels like we already sat thru the 2nd series.
(Take Series 1 and break it into 2 parts of x5 episodes each)
THE END!