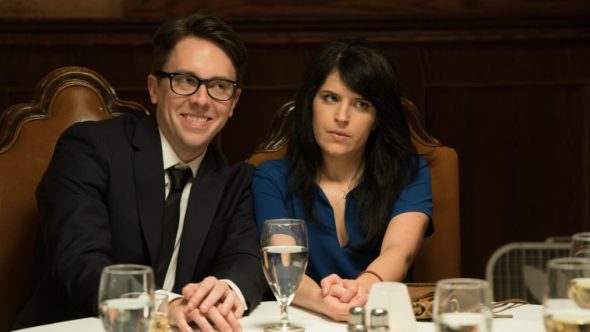 Pop is ready to commit! The network just announced they’ve renewed the TV show Hot Date for a second season.

Based on the CollegeHumor web series, the comedy explores the awkwardness and hilarity of dating in the 21st century. The cast includes Brian K. Murphy and Emily Axford.

Pop has ordered 10 episodes for season two of Hot Date. A premiere date has not yet been announced, but you can read more info below:

Justin Rosenblatt, EVP of Original Programming of Pop stated, “All the incredibly talented auspices involved in these three projects have terrific senses of humor. We’re thrilled to go on another round with HOT DATE, which starts production in New Orleans this April, and our upcoming comedy pilots, which shoot next month, are relatable, broad and sometimes even indecorous.”

Programming descriptions are as follows:

HOT DATE (SEASON TWO): Fronted once again by husband and wife comedy duo Emily Axford and Brian K. Murphy, known for their hilarious parody content on CollegeHumor, this season of HOT DATE will tackle the awkwardness and unpredictability of friendships, love and adulthood with the help of new characters and familiar faces from the show’s freshman season. Season two will be set in a new city, New Orleans, and focus on the many eccentricities “The Big Easy” has to offer – from gluttonous bourbon-induced debauchery, to haunted Airbnb’s and more – while remaining centered on relational comedy. “Emily” and “Murph” are also planning a wedding and must attempt to navigate the various stresses that come with taking their relationship to the next level.

“With HOT DATE, we’ve been able to put an original spin on the relationship comedy, blending sketch and narrative elements in a way that really showcases Em and Murph’s incomparable comedic voices,” said Electus COO Drew Buckley. “We’re pleased to be digging into another season with our tremendous partners at Pop and look forward to bringing viewers more episodes that identify and illuminate life’s ridiculous, yet all too real, characters and encounters.”

What do you think? Have you seen Hot Date? Will you tune in for season two?

I absolutely love this show! Brian and Emily are incredibly talented and I can’t wait till next season!!!