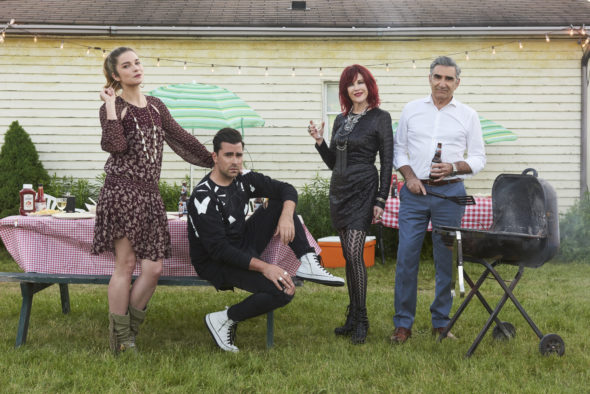 Did someone order a paddle? Pop has renewed its Schitt’s Creek TV show for a fifth season to debut on a date TBD in the winter of 2019. Although the season four finale will air on April 11th, thanks to the early renewal, the Roses will be in season for some time to come.

A Pop fish-out-of-water comedy from creators Eugene and Daniel Levy, Schitt’s Creek stars Eugene Levy, Catherine O’Hara, Daniel Levy, Annie Murphy, Chris Elliott, Jennifer Robertson, Emily Hampshire, Dustin Milligan, Tim Rozon, and Sarah Levy. The Canadian sitcom centers on the once wealthy Rose family. After losing everything due to back taxes, their last retreat is the backwater town of Schitt’s Creek, which they once purchased as a gag gift. Now they’ve got to learn to live with the locals, while they plot to regain their fortune and status.

In the middle of yet another breakthrough season, new episodes of SCHITT’S CREEK air every Wednesday night at 8:00 p.m. ET/PT on Pop, with the season finale scheduled to air on April 11.

“It is rare to find a television series that continues to deliver fanfare, critical acclaim and audience growth season after season,” said Brad Schwartz, President of Pop. “This gem of a show and its amazing ensemble cast, including the brilliant Eugene Levy and Catherine O’Hara, bring Emmy®-worthy performances to the screen that are both comedic and heart-warming. We couldn’t be more proud of how the show continues to find new viewers and creatively flourish into one of the finest series on television.”

SCHITT’S CREEK is a half-hour, single-camera comedy starring Eugene Levy, Catherine O’Hara, Daniel Levy, Annie Murphy, Chris Elliott, Emily Hampshire and Jennifer Robertson. The series follows a wealthy family who suddenly find themselves broke and forced to live in Schitt’s Creek, a small town they once bought as a joke.

What do you think? Do you still enjoy the Schitt’s Creek TV series? Do you plan to tune in for season five on Pop TV? Let us know, below.

Schitt’s Creek is unbelievably well written. Messages are clear and very much needed. The “Surprise Party” episode was especially memorable. Keep up the good work.

Love, love, love Schitts Creek. Can’t get enough. It’s the whole package, the great way they all work together. Everything about the show is memorable and quotable. Good work and let’s keep going.

I have never laughed so hard great cast & writing story line is hysterical PLEASE don’t cancel. We have a Shitts creek club we meet at my house there are 10 of us.

Schitt’s Creek is the best ever! I can’t wait to see the next season!! Daniel Levy is outstanding!

Funniest show i have ever watched. I’m so happy to learn season 4 wasn’t the end of this amazing show. I’m very happy!

Sooooo happy to learn Schitt’s Creek will be returning in 2019. I accidentally stumbled across it and now have my entire family and coworkers watching this fabulous show! I’ll be starting over with season 1 to fill the void.

Love Love Schitt’s Creek ! I binged watched 4 seasons in 2 weeks and so have so many others . It’s hysterical I’m thrilled for another season