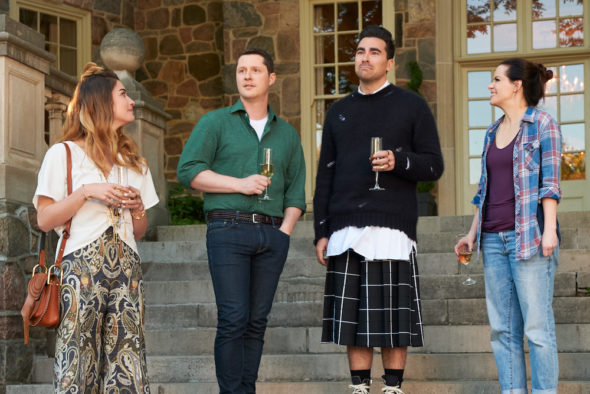 Will the Rose family find their happy endings in the sixth season of the Schitt’s Creek TV show on Pop? As we all know, the Nielsen ratings typically play a big role in determining whether a TV show like Schitt’s Creek is cancelled or renewed for season seven (in this case, we already know it’s ending). Unfortunately, most of us do not live in Nielsen households. Because many viewers feel frustration when their viewing habits and opinions aren’t considered, we invite you to rate all of the sixth season episodes of Schitt’s Creek here.

A Pop and CBC fish out of water comedy from creators Eugene and Daniel Levy, Schitt’s Creek stars Eugene Levy, Catherine O’Hara, Daniel Levy, Annie Murphy, Chris Elliott, Jennifer Robertson, Emily Hampshire, Dustin Milligan, Tim Rozon, and Sarah Levy. The Canadian sitcom centers on the once wealthy Rose family, who lost nearly everything, when the government collected on years of back taxes. Their only retreat is the backwater town of Schitt’s Creek, the family’s last remaining asset. Over the years, while plotting to regain their fortune and status, the family’s learned to live with the locals and may even have found some happiness.

What do you think? Which season six episodes of the Schitt’s Creek TV series do you rate as wonderful, terrible, or somewhere between? Do you think that Schitt’s Creek should have been renewed for a seventh season on Pop and CBC? Don’t forget to vote, and share your thoughts, below.