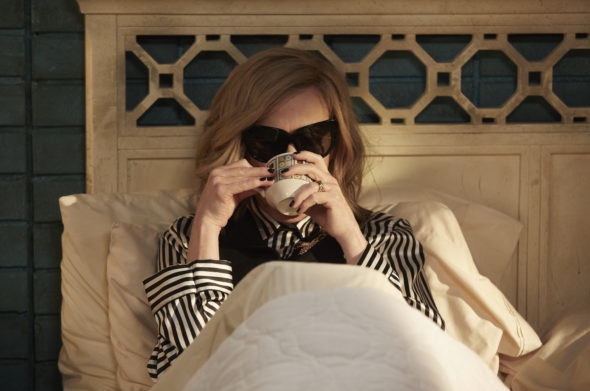 What’s in store for Johnny and Moira Rose and the kids? Has the Schitt’s Creek TV show been cancelled or renewed for a fifth season on Pop? The television vulture is watching all the latest TV cancellation and renewal news, so this page is the place to track the status of Schitt’s Creek season five. Bookmark it, or subscribe for the latest updates. Remember, the television vulture is watching your shows. Are you?

A Pop fish out of water comedy from creators Eugene and Daniel Levy, Schitt’s Creek stars Eugene Levy, Catherine O’Hara, Daniel Levy, Annie Murphy, Chris Elliott, Jennifer Robertson, Emily Hampshire, Dustin Milligan, Tim Rozon, and Sarah Levy. The Canadian sitcom centers on the once wealthy Rose family, who lost nearly everything, when the government collected on years of back taxes. Their only retreat is the backwater town of Schitt’s Creek, the family’s last remaining asset. Now they’ve got to learn to live with the locals, while they plot to regain their fortune and status.

The fourth season of Schitt’s Creek averaged a 0.08 rating in the 18-49 demographic and 272,000 viewers. Compared to season three, that’s up by 15% and up by 1%, respectively. Learn how Schitt’s Creek stacks up against other Pop TV shows.

Because this is originally a CBC TV show, its fate mostly depends on its Canadian ratings performance. I don’t feel like I’m going out on a limb when I say this but, flying blind, I expect if CBC renews Schitt’s Creek, Pop will follow suit. Since that’s just speculation, I’ll keep an eye on the Nielsens and update this page with breaking developments. Subscribe for free alerts on Schitt’s Creek cancellation or renewal news.

What do you think? Do you hope the Schitt’s Creek TV series will be renewed for a fifth season? How would you feel if Pop cancelled this TV show, instead?

Catherine O’Hara is fantastic as always, great that the magical duet with Eugene Levy gets a fifth chance, plus his real-life son steals the show.

Characters are beyond amazing. LOVE this series!

Love, love,love this show. Characters in this show are amazing !

I absolutely LOVE this show. I look forward to season 5.