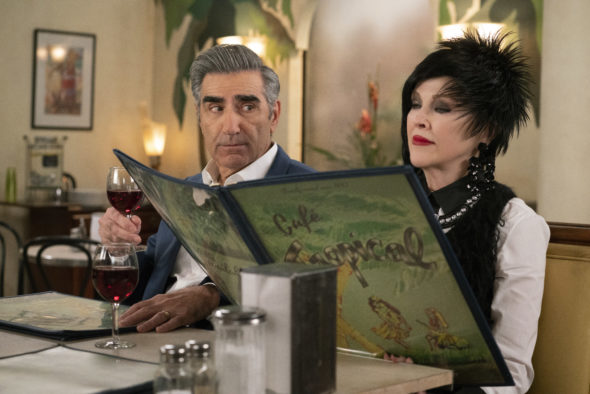 What’s next in the battle of the Roses? Has the Schitt’s Creek TV show been cancelled or renewed for a sixth season on Pop? The television vulture is watching all the latest TV cancellation and renewal news, so this page is the place to track the status of Schitt’s Creek season six. Bookmark it, or subscribe for the latest updates. Remember, the television vulture is watching your shows. Are you?

A Pop fish out of water comedy from creators Eugene and Daniel Levy, Schitt’s Creek stars Eugene Levy, Catherine O’Hara, Daniel Levy, Annie Murphy, Chris Elliott, Jennifer Robertson, Emily Hampshire, Dustin Milligan, Tim Rozon, and Sarah Levy. The Canadian sitcom centers on the once wealthy Rose family, who lost nearly everything, when the government collected on years of back taxes. Their only retreat is the backwater town of Schitt’s Creek, the family’s last remaining asset. Now they’ve got to learn to live with the locals, while they plot to regain their fortune and status.

The fifth season of Schitt’s Creek averaged a 0.07 rating in the 18-49 demographic and 198,000 viewers. Compared to season four, that’s down by 13% and 27%, respectively. Learn how Schitt’s Creek stacks up against other Pop TV shows.

Because this is originally a CBC TV show, its fate mostly depends on its Canadian ratings performance. As with last year, if CBC renews Schitt’s Creek for season six, I’m sure Pop will follow suit. The ratings are down but the series seems to be gaining more traction thanks in part to earlier seasons being available on Netflix. I’ll keep an eye on the Nielsens and update this page with breaking developments. Subscribe for free alerts on Schitt’s Creek cancellation or renewal news.

3/21/19 update: Schitt’s Creek has been renewed for a sixth and final season on CBC and Pop.

What do you think? Are you glad that the Schitt’s Creek TV series has been renewed for a sixth season? How would you feel if Pop had cancelled this TV show, instead? Are you sorry that the show is ending?

Absolutely adore this show! We would be seriously devastated if we couldn’t get it on POP for the 6th and final season! SO looking forward to it! SO sad this may be the final season!

This by far is the best and funniest show EVER! Love, Love, Love the entire cast! DO NOT CANCEL THIS SHOW! Please and Thank you.

Don’t even SUGGEST this wonderful, awe-inspiring show may be cancelled. I honestly would be broken hearted.

I hope they re new the show I love it.