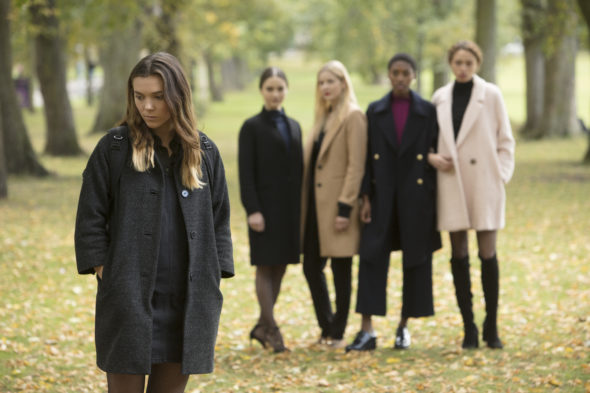 Are Georgia and Holly still in with the in-crowd? Has the Clique TV show been cancelled or renewed for a second season on Pop? The television vulture is watching all the latest TV cancellation and renewal news, so this page is the place to track the status of Clique season two. Bookmark it, or subscribe for the latest updates. Remember, the television vulture is watching your shows. Are you?

A Pop TV drama, Clique stars Synnøve Karlsen, Aisling Franciosi, Rachel Hurd-Wood, Emma Appleton, Ella-Rae Smith, Sophia Brown, and Louise Brealey. The British thriller centers on childhood friends Georgia Cunningham (Franciosi) and Holly McStay (Karlsen) who head off to university together, only to be drawn into a demanding social life with a seedy side. They soon become part of a co-ed cabal made up of young women who intern for economics professor Jude McDermid’s (Brealey) corporation. It’s not long until Holly realizes something is wrong, but Georgia can’t or won’t see it.

TV shows on Pop typically draw very low ratings and Clique debuted to very low numbers with a 0.0 demo rating and 11,000 viewers. Learn how Clique stacks up against other Pop TV shows.

Will Pop cancel or renew Clique for season two? Clique originated on BBC Three (the BBC’s digital platform) and did well enough that it later aired on BBC One (the flagship British television network). Since that time, the BBC has commissioned a second season. We just don’t know whether or not Pop will pick it up. I think it’s likely that they will renew it (despite very low ratings), so I’m making other dinner plans. I’ll update this page with any developments. Subscribe for free Clique cancellation or renewal news.

What do you think? Do you hope the Clique TV show will be renewed for a second season? How would you feel if Pop cancelled this TV series, instead?