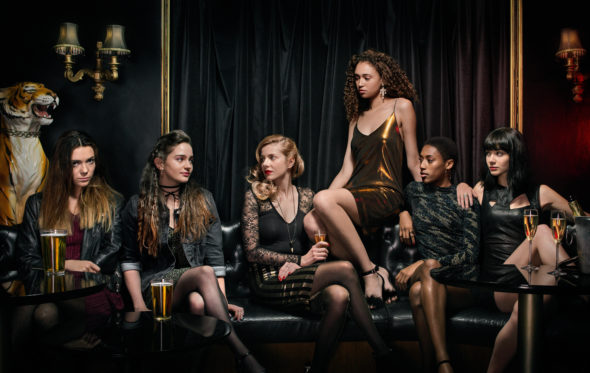 Best friends since childhood, Georgia and Holly head off together to university, looking forward to the time of their lives. The duo soon finds itself attending posh parties, and part of cabal of co-eds who all intern at economics professor Jude McDermid’s (Brealey) corporation, but beneath the glitz there’s a glut of grit.

Confident, intelligent, and breezy, Holly didn’t always have it easy, but her challenging childhood has made her strong. She finds the seedier side of her new life unattractive. On top of that, she’s concerned that Professor McDermid and her clique are downright dangerous.

Georgia is still something of a woman-child. Sometimes her bright smile is more for effect, as she tries to fake it until she makes it. She’s pleased to receive attention from the clique as well as finally having a chance to outshine Holly. Since Georgia can be naïve and even willingly obtuse, she cannot or will not let herself think about why the clique is interested in her. This causes a rift between Holly and her.

Rachel Maddox (Hurd-Wood), Fay Brookstone (Appleton), Phoebe Parker-Fox (Smith), and Louise Taggart (Brown) are at coterie’s center. Rachel’s a natural leader, and not entirely different from Holly. She’s adept at sizing up others and figuring out what makes people tick.

Ambitious Fay was the first inductee to the Solasta Women’s Initiative. A natural beauty, other women admire her, but deep inside, she is troubled.

Meanwhile, Phoebe loves a party and seems like she’s harmless if shallow. She has her strengths and knows how to charm people. She’s also determined not the let anyone change her life.

Finally, there’s Louise, who knows her intellect is stronger than her social acumen. She envies Holly’s unflagging candor and wishes she had her guts.

As she realize how riddled with sex, drugs, and betrayal their new scene is, Holly becomes suspicious that these new people could well pose a dangerous threat. Naturally inquisitive, and disinclined to tolerate any nonsense, she resolves to get to the real truth behind the shiny facade.

What do you think? Do you like the Clique TV series? Should this Pop TV show be cancelled or renewed for another season?