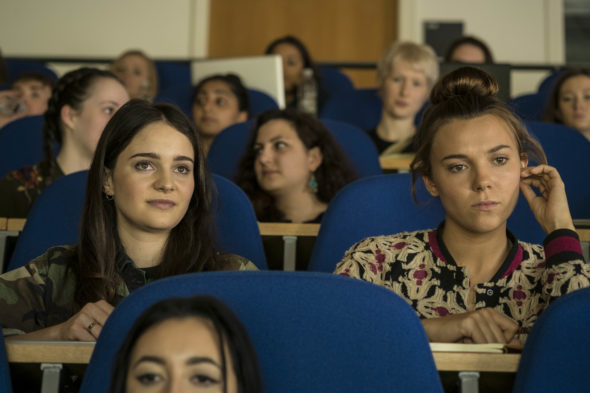 Is the first season of the Clique TV show on Pop heating up or leaving you cold? As we all know, the Nielsen ratings typically play a big role in determining whether a TV show like Clique is cancelled or renewed for season two. Unfortunately, most of us do not live in Nielsen households. Because many viewers feel frustration when their viewing habits and opinions aren’t considered, we’d like to offer you the chance to rate all of the Clique season one episodes here.

A Pop TV drama, Clique stars Synnøve Karlsen, Aisling Franciosi, Rachel Hurd-Wood, Emma Appleton, Ella-Rae Smith, Sophia Brown, and Louise Brealey. The British thriller centers on childhood friends Georgia Cunningham (Franciosi) and Holly McStay (Karlsen) who head off to university together, only to be drawn into a demanding social life with a seedy side. They soon become part of a co-ed cabal made up of young women who intern for economics professor Jude McDermid’s (Brealey) corporation. It’s not long until Holly realizes something is wrong, but Georgia can’t or won’t see it.

What do you think? Which season one episodes of the Clique TV series do you rate as wonderful, terrible, or somewhere between? Should Pop cancel or renew Clique for a second season? Don’t forget to vote, and share your thoughts, below.