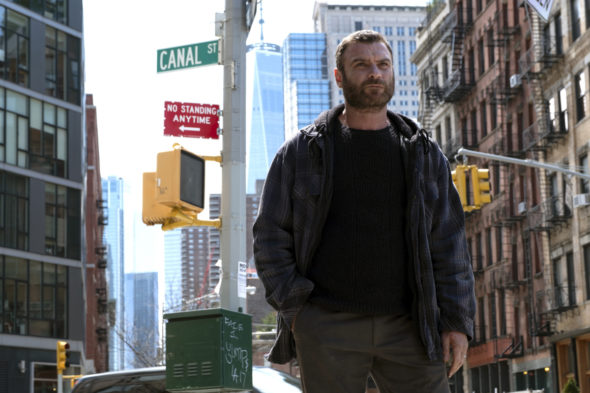 Ray Donovan will be back! Showtime just announced they’ve renewed the TV show for a seventh season.

LOS ANGELES, CA – December 20, 2018 – SHOWTIME has ordered a seventh season of its hit drama series RAY DONOVAN, starring multiple Emmy(R) and Golden Globe(R) nominee Liev Schreiber and Jon Voight in his Golden Globe winning role. Production will begin in Spring 2019 in New York. The current season of RAY DONOVAN airs on Sundays at 9 p.m. ET/PT, with its season finale on January 13. The announcement was made today by Gary Levine, President of Programming, Showtime Networks Inc.

As season six progresses, Ray’s journey in New York has been fueled by his subconscious need for help. After his life was saved by a Staten Island cop named Mac (Domenick Lombardozzi), Ray must navigate the complicated debts and emotions that grew out of that relationship while also trying to save the mayoral campaign of Anita Novak (Lola Glaudini), the favored candidate of Sam Winslow (Susan Sarandon). On the family front, Mickey (Voight) is on a mission to hunt down Ray to seek revenge and Ray struggles to cope after Bridget (Kerris Dorsey) tells him that she must break away from her father and the havoc his life has brought. A SHOWTIME production, RAY DONOVAN also stars Eddie Marsan, Dash Mihok, Katherine Moennig, Pooch Hall, Kerris Dorsey, Devon Bagby and Graham Rogers. RAY DONOVAN is executive produced by David Hollander, Mark Gordon, Bryan Zuriff and Lou Fusaro, and was created by Ann Biderman.”

What do you think? Do you watch Ray Donovan? Are you glad it’s been renewed?

Great!! Ray an Mickey!! The outcome between these Tow will be very Interesting.love the show.Keeps you in it,can’t wait for the next episode.

Best tv show ever ! I am sad about Abby being gone , loved her ! And Avi ( not sure of spelling ) I loved the 3 of them being a team with Lena ! I hope Avi comes back and the 3 work together again ! Cant wsit for season 7,8 , 9,,, ! Love all the Donovan characters! The whole cast is great ! Great job !!

I LOVE RAY DONOVAN. I was glad to see Bridgett buck up and get tough. Hope she stays that way. I hope Ray finds a lover as tough as he is who is a soft place for him to land. Most awesome show ever.

For me this is the best show on TV. Really glad that there will be a Season 7, and hopefully beyond.

I love watching Ray Donavan! I’m so glad there’s gonna be a season 7.

I love Ray! I think people too much blamed him for things he did NOT do and he never explained to them he didn’t do that (usually his pissy wife Abby. I rewatch all the episodes and about the third time through I grew to just hate Abby. Everybody on the series seemed to think she was perfect but all she did was ***** and her cursing–that was over the top. Ray was earning the living and she did nothing to help, except curse. Then I got tired of Bunchy who just was a big baby and always feeling sorry… Read more »

it is a talented cast which appears to work as a cohesive unit and I am chuffed that it has been renewed..i am an avid fan of Live …

SO EXCITED!!! RAY NEES TO GET BETTER AND MOVE ON ..REALLY THE WHOLE FAMILY DOES..THANK YOU THANK YOU

I love this show. Live Schreiber and Jon Voight are great. Something about this dysfunctional family makes me not want to miss a single episode.

Excellent show- from the story lines to the fantastic cast members!!! I’m totally invested in the characters and am so pleased that the series has been renewed. At last, great adult entertainment hasn’t been canned for FLUFF ! Very tired of watching junk on T.V.