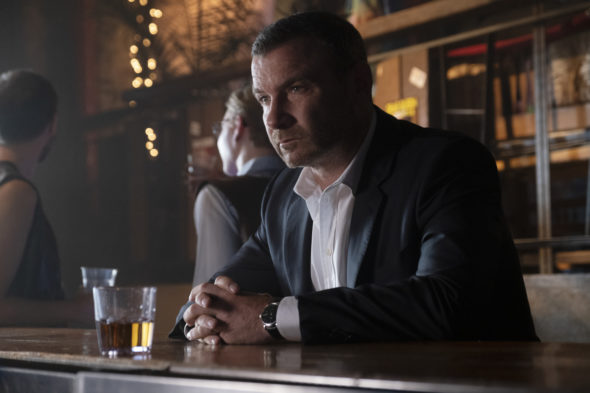 It may not be the end of the line for TV’s favorite fixer. The Ray Donovan TV show has been cancelled by Showtime but series star Liev Schreiber now says Ray’s story’s not over.

Season seven of Ray Donovan stars Schreiber, Alan Alda, Zach Grenier, Jon Voight, Dash Mihok, Eddie Marsan, Pooch Hall, Kerris Dorsey, and Graham Rogers. The series centers on professional fixer Ray Donovan (Schreiber), who’s working to be the man his family needs him to be. While he makes progress with Dr. Amiot (Alda), there are dangers from the past that require the Ray Donovan of old. Between NYC mayor Ed Feratti (Grenier), an unrelenting NYPD officer hunting for the truth and clients old and new, Ray struggles to find the balance between fixing for clients and fixing himself. And when Feratti’s corruption brings a piece of Mickey’s past (Voight) back to New York, Ray is forced to seek answers to long-buried questions.

Despite being one of the cable channel’s highest-rated shows, Showtime cancelled the series earlier this month and left the series with unresolved cliffhangers. Fans and showrunner David Hollander were shocked by the cancellation. Hollander later said that there were plans to wrap up the show with an eighth and final season.

Fans of the long-running series haven’t been quiet about their disappointment and it seems that Showtime may be rethinking the decision to cancel the show. Schreiber wrote, “It’s hard to describe how amazing it feels to those of us in the Ray Donovan family who have been lucky enough to experience the overwhelming love and support that all of you have expressed for our show since the news broke that Ray would not return. What’s even more incredible is that it seems your voices have been heard. Too soon to say how or when, but with a little luck and your ongoing support, there will be more Ray Donovan. So to all the Donofans who got their bats out and beat the odds. Thank you.”

Of the possibility of reviving the show, Hollander said, “I would never say never. It is much easier to do in the now. The sets are still standing. The people are still contracted. The mechanisms are in place. Once we tear down the sets and put the costumes away… it’s a lot of actors who are in demand.”

It seems senseless to fans to cancel something that works. It’s difficult enough to discover the perfect blend of anything, but a perfect blend in the art of storytelling and the well assembled crew to bring real interest of the characters to the fans, bravo. We genuinely have grown fond of the show and love how the moments of triumph emerge against impossible odds. Sometimes it’s important to just stick with the recipe. If the people are eating it up, don’t change a damn thing, just keep on serving it up. Simply love it!!

At least you all could make a movie

Yes!! Please bring back Ray Donovan!! As far as I’m concerned, it was and is one of the best series that was ever shown on TV!!! I must say that I didn’t enjoy the last season in New York, but I was gettng used to it and the story was getting better. I really liked it when the whole Donovan clan was involved in the story! I truly hope that it comes back with more new episodes soon!!! Ray Donovan series must live on!!!!

Yes to season 8 of Ray Donovan. You have to wrap it up for loyal fans.

If Showtime thinks anyone will watch any series of theirs ever again they’re crazy! The cost of seven seasons plus the waste of time to have them just drop it is unacceptable! Season 8 or screw Showtime forever!

Ray Donovan is a beaming light of quality writing, characters & acting in a swamp of tired woke politically correct rubbish intent on the lecturing & talking down to the very people that pay for it!! Donavan 8 or else we send Mickey!

We love Ray Donovan…. it has been our favorite show and have talked many others into watching it… we are not ready for the show to be over… Please bring it back…

Ray Donovan is one of the best shows out there. Great acting and every episode is great. I don’t get why the higher rated favorite shows get canceled. Please bring this show back. I can see from a lot of the other comments that many people are upset and feel the same way.

Bring Ray Donovan back for Season 8 love this show and was so upset when I saw it was being cancelled. It is the only reason I pay to keep Showtime. I will cancel if no Ray Donovan Season 8!

I love this shows ongoing quality. I will not subscribe to SHOWTIME if in fact RD is cancelled. C’mon NETFLIX…step up if SHOWTIME doesn’t see the error of it’s ways.

It’s my favorite show!! Only reason I buy showtime!! I’m cancelling for it is not brought back!!

ABSOLUTELY BRING BACK RAY! CAN’T BELIEVE IT MIGHT BE CANCELLED. GREATEST OF ALL SHOWS !!!

Please bring it back. Allow the show to have an ending, and all the fans to have closure .