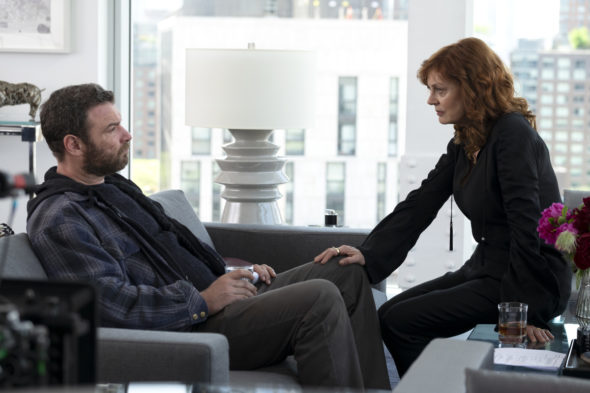 Will Ray Donavan remain in New York City? Has the Ray Donovan TV show been cancelled or renewed for a seventh season on Showtime? The television vulture is watching all the latest cancellation and renewal news, so this page is the place to track the status of Ray Donovan, season seven. Bookmark it, or subscribe for the latest updates. Remember, the television vulture is watching your shows. Are you?

The sixth season of Ray Donovan averaged a 0.16 rating in the 18-49 demographic and 959,000 viewers. Compared to season five, that’s down by 37% and 16%, respectively. Find out how Ray Donovan stacks up against other Showtime TV shows.

Will Showtime cancel or renew Ray Donovan for season seven? The ratings are way down but, at this point, I think it will depend as much on the creative will to continue the series. For now, I’ll keep an eye on the Nielsens and update this page as needed. Subscribe for free updates on any Ray Donovan cancellation or renewal news.

*12/20/18 update: Showtime has renewed Ray Donovan for a seventh season.


What do you think? Are you glad that the Ray Donovan TV series has been renewed for a seventh season? How many more seasons do you think this Showtime TV show should run?

My wife like the program. Me, not so much. Why, you ask. There is too much swearing that is not needed. Just my thought.

We love Ray Donovan. We miss it. We even view reruns. PLEASE COME BACK!

I enjoy the show please renew.

Without a doubt season 6 was the best yet. Please renew . We are really getting into Ray’s head and his family is also evolving. You must keep Aunt Sandy.

Season 6 was the only bad season. Too much missing between the scenes,. I didnt think Abby suffered at all from what I saw. Sorry but season 6 was dog ****. I still like the show tho… Im just so torn you could say it was the best season. ROFL

Please do a 7th series the 6th is the best so far, losing viewers just shows a lack of intelligence on the viewer behalf…

I love Ray Donovan I would hate for the show to be discontinued.

I love watching Ray Donovan since it started. I enjoy it & hope they continue with more episodes. This show is one of a kind filled with great actors it definitely deserves an award this year. I can’t wait for the next episodes. Love Ray Donovan & everyone who is on this show & the producers, writers etc. Just can’t get enough so good. Thank you!

I am a devoted fan. Would like to see Ray pick himself up, and project his original confidence. His emotional crisis should end. The way he cleaned things up in the 6th season, gives hope. I am also Ex-Soprano fan.

Ray Donovan is a beautifully written dark and sensitive show. Certainly one of the best on tv. This show has a lot more to tell and should go on for a few more seasons.

Ray Donovan is awesome! I hope they continue it for 10 more seasons!!

I love this show! But liked it better when it was in LA.

Time to cancel Ray Donovan. A once great drama, with a sexy anti-hero redeemed by family love and ties, has devolved into meaningless trite darkness. Creativity, layered complexity gone and nothing left but tired scripts and exhausted characters. Beaming the entire Donovan clan magically to NYC was far from a new beginning. Sad.

I agree! The N.Y. Setting is a little gritty!….

A better story line could easily turn things around. I’m a committed fan and a series can always evolve

SO HAPPY FAY DONOVAN IS GOING TO HAVE ANOTHER SEASON, HOPE SEASON WAS THE END OF THE DYING WIFE, HOPE THE CHILDREN ARE SUPPORTING HIM MORE, AND THE FIND A LOVE INTEREST FOR HIM… AND HES OUT IF THE FUNK…