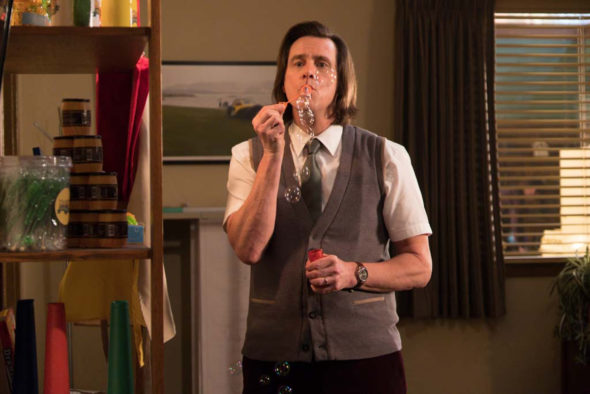 Is Jeff Piccirillo just kidding himself? Has the Kidding TV show been cancelled or renewed for a second season on Showtime? The television vulture is watching all the latest cancellation and renewal news, so this page is the place to track the status of Kidding, season two. Bookmark it, or subscribe for the latest updates. Remember, the television vulture is watching your shows. Are you?

The first season of Kidding is averaging a 0.07 rating in the 18-49 demographic and 245,000 viewers. Learn how Kidding stacks up against the other Showtime TV shows.

Will Showtime cancel or renew Kidding for season two? Showtime isn’t ad-dependent, so ratings aren’t always as crucial to their TV shows’ survival. Though the ratings haven’t been great, I think Showtime gets enough mileage out of having a Jim Carrey show to renew it. For now, I’ll keep an eye on the Nielsens and update this page with breaking developments. Subscribe for free Kidding cancellation and renewal alerts.

10/10/2018 Status Update: Kidding has been renewed for season two on Showtime. Details here.

What do you think? Are you happy the Kidding TV show was renewed for season two? How would you feel if Showtime had cancelled this TV series, instead?