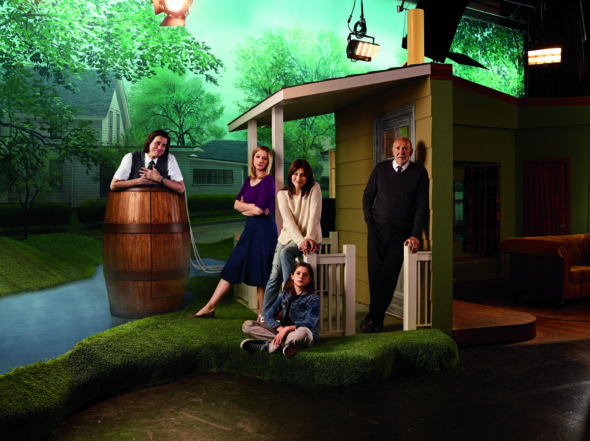 TV show description:
From creator Dave Holstein, the Kidding TV show is a comedy-drama centering on the host of a beloved children’s TV show. Jeff Piccirillo (Carrey), aka Mr. Pickles, is nothing if not a children’s television icon. He is known for his compassion and wisdom to children, as well as to their parents, who also grew up under his loving influence.

When Jeff’s family starts to break down, he finds no solace in the stories and puppets he has always used navigate stormy seas. As the crisis intensifies, Jeff finds his coping skills fading fast.

When this sometimes cruel world comes crashing down on such a kind man, his sanity soon starts to slip away. As his problems progress, he begins to resist the structure of his show, Mr. Pickles’ Puppet Time, as well as his own father, Seb (Langella), who is also his executive producer.

Seb decides he must come up with a plan for the show without Jeff, before he destroys its carefully crafted brand. Meanwhile, their head puppet maker, Deidre (Keener), has her own troubles — both personal and professional. Rounding out Jeff’s circle is his estranged wife, Jill (Greer) and son, Will (Allen).

What do you think? Do you like the Kidding TV series? Should this Showtime TV show have been cancelled or renewed for a third season?

one of the most creative and uniqu4 shows on tv. i can’t understand why it isn’t getting the popularity it deserves.

It got official renewed season 2 last month they renewed for next season.

Jeff (and Jim) are both straddling that line between between fatuous New Age crap and personal revelation that reveal truly moving truths about living with loss. I hope they renew it because even if this season ends in crap there is much to explore. And you have to say it’s brilliant to give a father who’s beloved son just died a terminal gf. And Michel Gondry should always be given free reign to pursue his amazingly original take on the conscious and unconscious worlds of life and how they collide. (Watch “The Science of Sleep”, to see how familiar nuance… Read more »