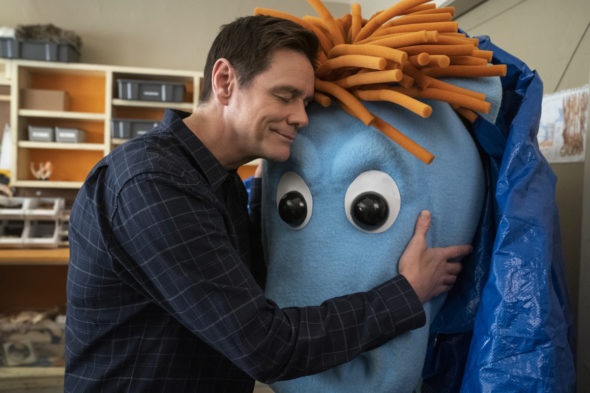 Can a children’s show host’s nervous breakdown get good ratings? Has the Kidding TV show been cancelled or renewed for a third season on Showtime? The television vulture is watching all the latest cancellation and renewal news, so this page is the place to track the status of Kidding, season three. Bookmark it, or subscribe for the latest updates. Remember, the television vulture is watching your shows. Are you?

Airing on the Showtime cable channel, the Kidding TV series stars Jim Carrey, Frank Langella, Catherine Keener, Judy Greer, Cole Allen, Juliet Morris, and Justin Kirk. The show follows a beloved children’s television host named Jeff Piccirillo aka Jeff Pickles (Carrey). Following the death of one of his sons, he finds great difficulty in adapting to the hardships of life and ends up spiraling into insanity. Season two picks up with Mr. Pickles’ Puppet Time off the air for the first time in 30 years and Jeff must find a way to communicate with his many fans who still need him. Jeff creates a new and controversial method to talk directly to children across the world only to become the target of animosity for the first time in his career. As Jeff navigates the most complicated moral gray areas of his life, he discovers a new side of himself in a season full of music, magic, puppets, and pathos.

The second season of Kidding averaged a 0.02 rating in the 18-49 demographic and 89,000 viewers. Compared to season one, that’s down by 74% in the demo and down by 63% in viewership. Find out how Kidding stacks up against other Showtime TV shows.

Will Showtime cancel or renew Kidding for season three? The ratings were quite low in the first season and they’re very low in season two. However, Showtime’s not worried about advertisers or “live” viewing — they just have to please their subscribers. Last year, both Carrey and the show were nominated for Golden Globe Awards. My gut tells me that Kidding will most likely be cancelled but, if Carrey wants to keep making it, there will be a third year. I’ll update this page with breaking developments. Subscribe for free alerts on Kidding cancellation or renewal news.

7/15/20 update: Kidding has been cancelled so there won’t be a third season on Showtime.

What do you think? Were you hoping that the Kidding TV show would be renewed for a third season? Are you sorry that Showtime cancelled this TV series, instead?

There has to be more intelligent people out there.
The individuals who cancelled this masterpiece have got to be Kidding! Don’t rely on ratings. People are just discovering these new media platforms and dedicating time to watch shows that are brilliant only to have their hopes dashed by some studio *** who cancels the show.

I just stumbled upon this show this week. This show is absolutely amazing. I’ve watched a lot of shows in the past year and do not remember the names of most of them but this show I will not forget. The show is completely brilliant in so many ways. I never watch a show where I’m amazed at the genius all the way through but this show just kept surprising me. I am so sad that there won’t be a third season :(. Bring this show back pleaseeeeeee!

Love, love, love! Took a few episodes to catch on…The show is complex, funny, full of twists and turns, love and pathos. It takes time to get the hang of it. Best Jim Carrey ever! This shows his absolute genius, subtleties and range. The cast is superb. PLEASE DON”T CANCEL!!! More KIDDING please!!

PLEASE DON’T CANCEL THIS SHOW!!! Haven’t seen such creative writing and great casting since Frasier. Give it time.. people are just starting to learn about it. Word will spread.. it will catch on !! Jim Carrey is brilliant and the cast chemistry is perfect. Its fresh and wonderfully presented. I’m hooked !! Was from season 1 episode 1.

Kidding is pure genius. Nothing else like in on TV and Jim Carrey is the masterworker of actors. The whole cast are the best – casting is marvelous as are the puppets and sets! Hard to describe save to say something like “surreal comedy/drama speaks truth about the human soul”. Let’s not forget its creator, David Holstein,without whom none of this would happen. I too hope it returns, but I also agree that it looped back in a satisfactory way. Maybe it should end there on a such a loving and redemptive note.