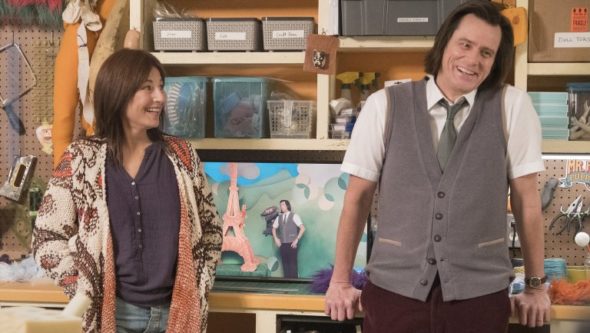 This is no joke. Showtime has just released the premiere of Jim Carrey’s new TV show Kidding ahead of its debut date.

A comedy, Kidding stars Jim Carrey as “Jeff, aka Mr. Pickles, an icon of children’s television and a beacon of kindness and wisdom to America’s impressionable young minds and the parents who grew up with him. But when this beloved personality’s family begins to implode, Jeff finds no fairytale, fable or puppet will guide him through this crisis, which advances faster than his means to cope.” The cast also includes Frank Langella, Catherine Keener, and Judy Greer.

Kidding officially premieres on Showtime on September 9th at 10 p.m. ET/PT, but you can watch the first episode in full below:

What do you think? Are you a fan of Jim Carrey? Will you watch Kidding?

Unlike his early years, I don’t find Jim Carrey funny or a draw anymore.

Agreed. Funny that we aren’t allowed to call names here, when all Jim Carey has done to our President is call him names and draw humiliating pictures of him. The sooner this crap is cancelled, the better.

oh come on its good