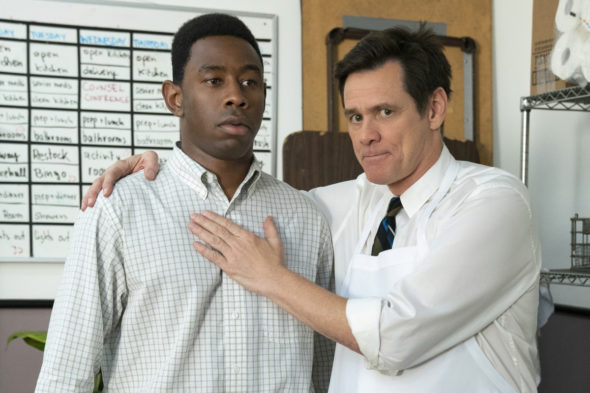 Will Jeff find his way in the second season of the Kidding TV show on Showtime? As we all know, the Nielsen ratings typically play a big role in determining whether a TV show like Kidding is cancelled or renewed for season three. Unfortunately, most of us do not live in Nielsen households. Because many viewers feel frustration when their viewing habits and opinions aren’t considered, we invite you to rate all of the second season episodes of Kidding here.  *Status update below.

A Showtime comedy-drama, the Kidding TV series stars Jim Carrey, Frank Langella, Catherine Keener, Judy Greer, Cole Allen, Juliet Morris, and Justin Kirk. The show follows a beloved children’s television host named Jeff Piccirillo aka Jeff Pickles (Carrey). Following the death of one of his sons, he finds great difficulty in adapting to the hardships of life and ends up spiraling into insanity. Season two picks up with Mr. Pickles’ Puppet Time off the air for the first time in 30 years and Jeff must find a way to communicate with his many fans who still need him. Jeff creates a new and controversial method to talk directly to children across the world only to become the target of animosity for the first time in his career. As Jeff navigates the most complicated moral gray areas of his life, he discovers a new side of himself in a season full of music, magic, puppets, and pathos.

What do you think? Which season two episodes of the Kidding TV series do you rate as wonderful, terrible, or somewhere between? Do you think that Kidding should be cancelled or renewed for a third season on Showtime? Don’t forget to vote, and share your thoughts, below.

*7/15/20 update: Kidding has been cancelled so there won’t be a third season on Showtime.

KIDDING: The writing reminds me of the superb quality of the best comedy ever made, THE OFFICE. How a 3rd season of KIDDING is even a question is on par with the question of , Are Pam and Jim soulmates?” Kidding is so engaging, quirky and substantive that it’s current and next great show on television. To let this relatively ” low rated” show fade away is akin to ending THE OFFICE in the middle of season 3. PLEASE!

Please renew for season 3. I love Jim Carey, and I truly enjoy this show!

Please keep renewing this show so funny even though it weird too love it.