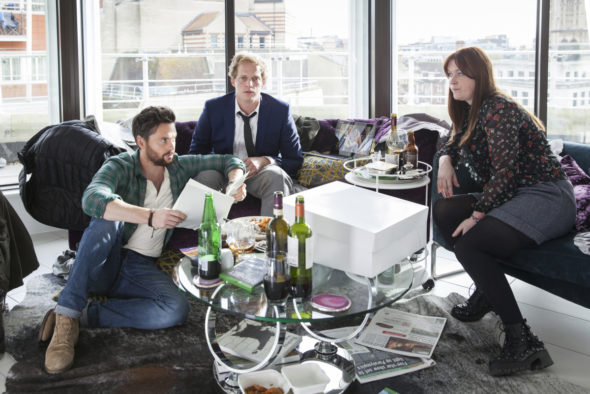 TV show description:
A dark, British wish-fulfillment comedy from creator Sam Bain, the Ill Behaviour TV show centers on Joel (Geere). This recently divorced underachiever with a fondness for cocaine flounders as he looks for some direction and meaning in life. After receiving a £2 million divorce settlement, he reunites with his old schoolmates, Charlie (Riley) and Tess (Regan).

Although Tess has a job in IT, it is killing her spirit. She dreams of establishing herself as a science-fiction writer, but lacks the courage to take that leap.

Meanwhile, Charlie and his wife, Kira (Chong), are the parents to two young girls. This good looking, sensitive, long sober family man is a hypnotherapist and a loyal friend. When Joel learns Charlie has been diagnosed with Hodgkins Lymphoma, he springs into action, regardless of his friend’s wishes.

After the sizable divorce settlement throws Joel for a loop, Charlie persuades him to get back out there and start dating. Joel soons connects with Nadia (Caplan), an alcoholic sex addict, who also happens to be an oncologist.

While Charlie’s cancer is still in its early stages and should respond well to chemotherapy, he doesn’t put much stock in modern medicine. When he chooses to forego chemo in favor of a homeopathic approach, Joel resolves not to allow his old friend risk his life, this way.

He enlists both Tess and Nadia in a futile attempt to convince Charlie to undergo chemo. When he refuses, Joel decides to employ his “dirty divorce money” to force his friend to take the treatment.

Participating in Joel’s scheme to save Charlie provides Tess with a chance to change everything and unleashes in her a fortitude she never knew she had. Meanwhile, getting to know Charlie and learning about his recovery, makes Nadia take a fresh look at everything.

Joel has long lacked purpose. Now, he throws himself into this plot to cure Charlie and will do whatever it takes to save his friend and finally accomplish something that matters. Will it work? Can their friendship survive? Stay tuned.

What do you think? Do you like the Ill Behaviour TV series? Should this TV show be cancelled or renewed for another season on Showtime?