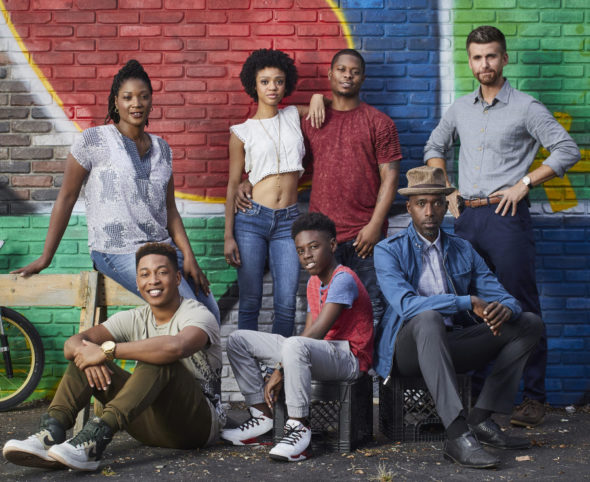 TV show description:
Created by Lena Waithe, who executive produces with Common and Elwood Reid, The Chi TV show delves into life on the South Side of Chicago. True to its name, the drama is shot entirely in the Windy City. It follows a group of Chicagoans who, at first, are connected by circumstance, but begin to develop a bond, due to their loneliness and quest for atonement.

Brandon (Mitchell) is a dreamer who is ready to take big risks to have a good life and relationship with his girlfriend, Jerrika (Boone). Meanwhile, a breezy, cheerful teenager, Emmett (Latimore) finds he must shoulder some difficult duties. At least his mother, Jada (Ross), can guide him along his way.

Something of a nomad, Ronnie (Mwine), is so hungry to be loved that his motives and actions seem suspect. Then there’s young Kevin (Hibbert). This pre-teen inadvertently witnesses something that changes his whole perception of the world. Once his eyes are opened, he needs to find a way to get back to the business of just being a kid.

This whole group is constantly watched by the police. Luckily, Detective Cruz (Riesco) is a good cop, who knows the neighborhood, and always has justice as his ultimate aim. Sharing a desire to live meaningful lives, these Chi-Town denizens struggle to get past the obstacles in their path, whether imposed by society-at-large, or of their own making.

What do you think? Do you like The Chi TV series? Should this TV show be cancelled or renewed for another season on Showtime?

The Chi, is one of the best shows I have ever seen, that seems to enrapture living in what would be considered the inner city of a poor Black community struggling without good paying jobs and good paying jobs with drugs.

I love the Chi. Season 5 please!